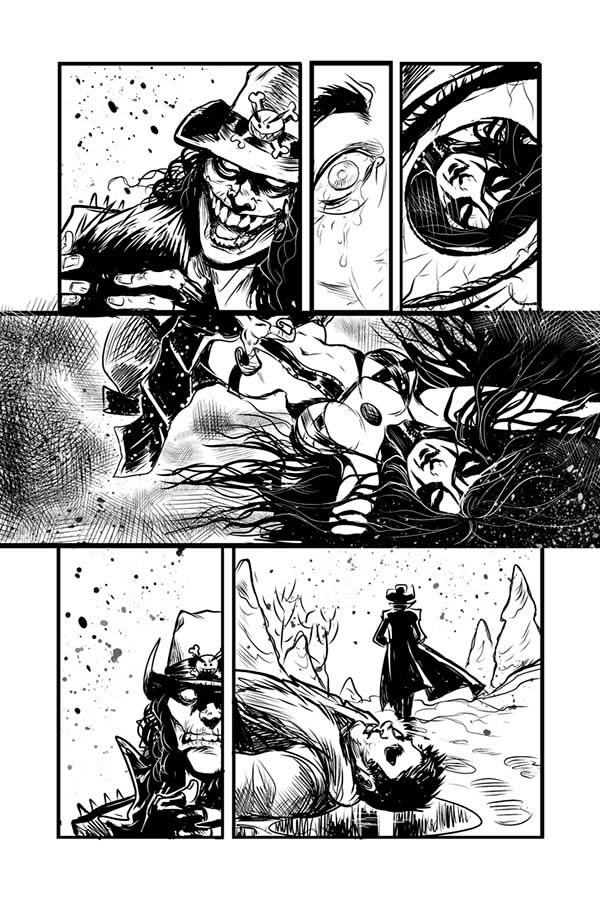 “Evil Ernie came out when I was a teenager, when I was looking for something dangerous, scary, and sexy to read, and I loved it,” says Tim Seeley, referring to the original Chaos! Comics publishing era which took the industry by storm in the 1990s.  “It was like punk music, late night horror movies, and a lingerie catalog rolled into one perfect creation. To say it had an effect on my work as a comics professional is a bit of an understatement!”

Evil Ernie, the undead serial killer.  Chastity, the vampiric punk-rock assassin.  Purgatori, the goddess of bloodsuckers.  The Omen, a band of supernatural misfits.  When each of these terrifying figures witnesses a vision of the world’s impending doom, they rush headlong into conflict with one another.  Some try desperately to avert the nuclear holocaust, out of altruism or self-interest, while others… just want to raise some hell!  It’s the return of the Chaos! universe on a grand scale, the resurrection of fan-favorite boogeymen and femme fatales amidst a violent, apocalyptic upheaval.

“The Chaos! universe gave rise to the kind of comics that would, depending on your age, make you hide them under your bed, tattoo the characters across your body, or paint them on the side of your van.  Their characters inspired such intense reactions from readers.  I want to be part of that.  I want to really harness what made characters like Purgatori, Chastity, Evil Ernie, and The Omen so unique and special both for existing fans… and a whole new generation with room under their beds.”

“With Halloween right around the corner, it’s the perfect time to announce the full-scale Chaos! Comics revival,” says Nick Barrucci, CEO and Publisher of Dynamite Entertainment.  “Whenever you flipped the pages of an Evil Ernie, Cremator, or Bad Kitty comic, it was like your own private All Hallows Eve party.  Skulls and gore, vicious attitudes and zombie hordes, buxom beauties and malevolent metalheads — Chaos! Comics reveled in the rebel spirit of its hardcore audience.  We launched an Evil Ernie miniseries last year to universal fan and critical acclaim, and we are proud to expand the Chaos! line to its full glory with Tim Seeley, a modern master of terror, at the helm.  And I’m ecstatic to report, Mirka Andolfo’s art blows us away with every new page she turns in.  Watch out, Chaos! fans — this will be a book to kill for!”

The Chaos! Comics revival is slated for release in early 2014, and will be solicited in Diamond Comic Distributors’ Previews catalog, the premiere source of merchandise for the comic book specialty market.  As always, Dynamite encourages comic book fans to reserve copies with their local comic book shop or hobby specialty store.  Chaos! Comics will also be available for individual customer purchase through digital platforms courtesy of Comixology, iVerse, and Dark Horse Digital.