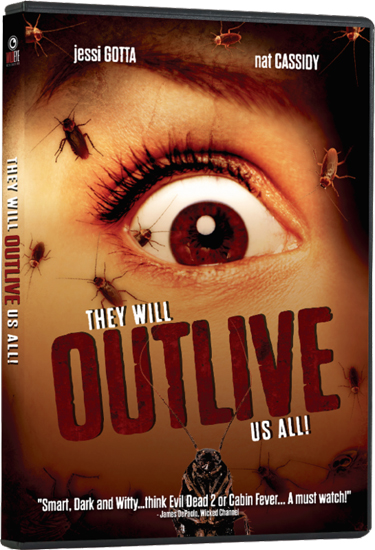 ‘They Will Outlive Us All’ Infests New York, Coming To VOD & DVD May 19

‘They Will Outlive Us All’ Infests New York

Spreads Nationwide May 19th on DVD and VOD

“Exactly the type of gem I look for in indie cinema. Don’t miss this film!” -Ain’t It Cool News

New York, NY – After screening at over two dozen film festivals worldwide, the infestation is coming into your home.  They Will Outlive Us All will be available nationwide on DVD and VOD May 19th from Wild Eye Releasing.  Dealing with the all-too-common problem of a messy roommate, Daniel and Margot find something far more insidious and disgusting growing in their apartment.   They must put their differences aside and fight the bugs before they outlive us all.

New York City has been devastated by a series of ‘Frankenstorms,’ food is scarce and all the bridges and tunnels are closed. In this post-apocalyptic city, roommates Margot and Daniel are bracing themselves for not only the next storm, but for something much more gruesome and undead – something growing right inside their apartment building. Can they survive each other long enough to stop it?

The DVD release of They Will Outlive Us All (SRP $14.95) will exclusively include trailers and previews.