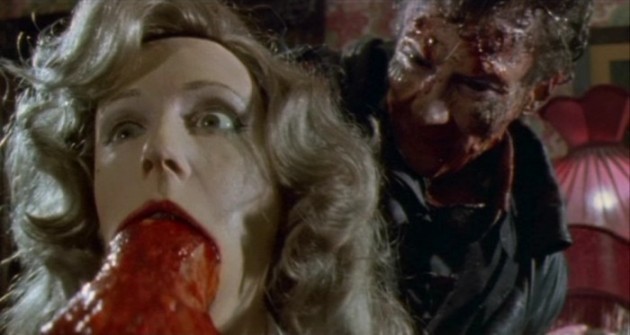 These Zombies Have Teeth, But Choose Not To Use Them

It’s common knowledge that zombies are most dangerous when they are within biting distance, particularly if travelling in a pack. Hordes of the undead take advantage of unsuspecting and oblivious meat-covered walking meals all the time, providing the type of warm nourishment that they crave. But what humans don’t realize is the deadly threat posed by walking corpses using “conventional” means as well..stabbings, shootings, fisticuffs, etc. Zombies can throw down when necessary, and are certainly unafraid to take a good ol’ fashioned ass whoopin’ if it’s the best way to achieve their goal: the consumption of the living.

This is a list of my personal top 5 “unorthodox” zombie kills from various horror films; by unorthodox, I mean any method non-bite related that results in a human being’s demise. Hey, zombies may have forgotten how to be human, but at least some of them never forgot the importance of a wicked kill.

Under normal circumstances, the average zombie avoids throwing fisticuffs most likely due to their complete ignorance of proper punching technique. However, pre-LOTR Peter Jackson’s cult classic gore-fest Braindead (also known as Dead Alive) is ANYTHING but normal. Ridiculously-clever kills and attacks are the norm, topped off the by a kung fu priest that kicks major ass -literally. As the hyper-aggressive undead turn up the body count, regular devouring of human flesh pales in comparison to several memorable murder scenes. The vision of a zombie fist ripping through Mandy’s mouth (from the other side!) may just take the cake, and for this kiwi import’s saying a lot.

We’ve all been there: tortured by visions and hallucinations of unrelenting ghouls, attacks becoming more frequent by the day. Unfortunately for Mary, the tormented, these become more and more vivid until the lines between what she hopes is fantasy and reality blur to the point of non-existence. The ghouls that roam the celluloid of this underappreciated classic beckon to our heroine, luring her to the pavilion of her dreams (literally). Sleepwalking is one thing, but sleep-driving is quite another! A lesson learned much too late for Mary as her trance state and competent motor skills drive right into a river, their final watery resting place. We can debate infinitely about whether the ghouls were technically “zombies”, but if your idea of the quintessential undead includes running, screaming and climbing then don’t bother..I’ll win.

It’s not every day that a zombie will literally stalk its prey, but that’s exactly what happens in Lucio Fulci’s horror masterpiece Zombi 2. While this film is groundbreaking in many ways, it also contains numerous kills that are still considered original and emulated by horror directors to this day (plus, having a zombie battle a shark underwater is just plain COOL!). But back to poor Paola, who can’t even take a shower without some zombie pervert spying on her through a window like some undead peeping tom. Of course, as the ghoul moves in and reaches through the wooden door, Paola could do nothing but become yet another helpless victim who forgot to run when she had the chance. With one hand around her head, the zombie slowly…and I mean SLOWLY…pushes her eyeball through a wooden shard. The agonizingly methodical result of this deliberate act is probably the first time that an eyeball has been completely pierced in plain view on film. If you wear contact lenses, you struggle with this scene every day while putting them in. Those of you that don’t have to put anything in your eye on a daily basis, consider yourself lucky.

The character of Bub is one of George A. Romero’s most fascinating creations. With this single zombie, Mr. Romero embodied humanity’s hope that the zombies COULD be tamed as he begins recalling actions and memories of his living past. Unfortunately, being slighted and holding a grudge proves to be one of these sentiments able to be recalled, and more importantly embraced. Continually taunted by military alpha male Captain Henry Rhodes, Bub begins feeling the ever-abundant emotion of hatred towards his captor. Through a seriously-complicated series of events, and remembering his own military past once upon a time, Bub finds himself in possession of a firearm and face-to-face with the fleeing Rhodes. He takes aim, and fires several shots that eventually find their target. As the mortally-wounded Rhodes falls backwards into a zombie horde, Bub takes a big step forward into the recently-embraced notion of the “intelligent” zombie (soon to be tackled during AMC’s hit series The Walking Dead in its upcoming fourth season).

When compiling a list of “top zombie” anything, your entire article is worthless if it doesn’t all come back to the film that started it all, Romero’s Night of the Living Dead. This film is noteworthy for many things, but zombies finding creative ways to kill the living is certainly one of them. There are two distinct examples of this phenomenon here. One which many horror film enthusiasts point to as being truly revolutionary is the child Karen’s murder of Helen, using a small shovel to repeatedly stab her mother. While an unconventional kill due to it being non-bite related, this scene also presents the first known example of a zombie using “tools” to kill a human. However, to me the death of Barbara’s brother Johnny has even more far-reaching ramifications in NOTLD‘s first scene. His death comes as a result of a blow to the head (thanks to an especially-pointy tombstone) while wrestling with the “original” zombie (Bill Hinzman). This is the first kill, in the first scene, at the hands of the first zombie to ever appear in what’s considered to be ground zero for the modern zombie horror film. From there, the cemetery ghoul doesn’t bother devouring the flesh of his victim, instead choosing to begin the long chase after Barbara which would eventually lead to the farmhouse. The initial kill in the original zombie film didn’t involve a bite or the consumption of human flesh…how about that?