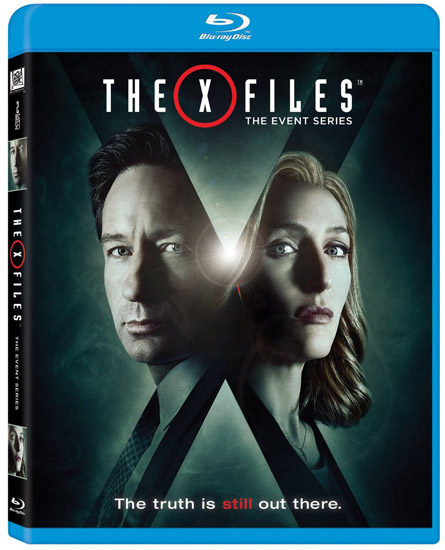 Synopsis: The tenth season of the American science fiction television series. The X-Files commenced airing in the United States on January 24, 2016, on Fox. It consists of six episodes. The season takes place fourteen years after the ninth season, which concluded airing in May 2002, and seven years after the film ‘The X-Files: I Want to Believe’ (2008). The season premiered on January 24, 2016.

Our Thoughts: ‘The X-Files’ returned to Fox for 6 episodes. As a fan since 1993, I was skeptical that it could bring back the magic lost after David Duchovny left the original series. The last movie was OK but not up to par really. However, this series took me by surprise.

The first episode plays catch up with where the characters are at now and introduces a few more. The X-Files is re-opened and they are pulled into another seemingly alien conspiracy which explains a new reality for longtime fans. Inspired by current events, the conspiracy aspect of the show takes a whole new turn. Joel McHale guest stars as TV host Tad O’Malley.

Episode two takes the agents on case concerning secret mutation experiments, which is related to the newly exposed conspiracy, and is very much reminiscent of the alien episodes early in the original series when the whole government coverup wasn’t out of control.

Episode three is a classic standalone, reminiscent of classic creature focused episodes, with a touch of humor. Rhys Darby and Kumail Nanjiani  guest star in this hilarious episode about a lizard man.

Episode four is both a familial tale, centered on Scully’s Mom, and creature focused on an undead garbage man brutally killing people. Both touching and brutal, the episode is another with that classic vibe from the original series.

Episode five centers around a case of extremist terrorism that leads the agents to working with a younger pair of agents, who happen to mirror the agents themselves, to attempt to speak with a comatose criminal. The result is a lot of that good ol’ X-Files humor, that longtime fans will appreciate.

Episode six returns to the conspiracy issues the show touched on in episodes one and two of this season. A virus begins spreading on a massive scale, while the truth of the conspiracy is revealed in classic X-Files style. It ends on a cliffhanger, showing the potential for another event series in the future.

I think the return to the alien conspiracy in this event series has been better in than it was in the last few seasons of the original run of the show, where it got kind of out of hand.  My favorite episodes will always be the standalone creature feature stories and they were, once again, the best episodes of this season as well. However, the whole conspiracy aspect is needed to thread the series all together in a way, and they did a good job of bringing into modern times.

David Duchovny and Gillian Anderson still have the onscreen chemistry the fans have known and loved. They were at the top of their game as actors as well. Joel McHale who plays TV host Tad O’Malley is also excellent and it’s nice to seem him in a less comedic role.  Rhys Darby and Kumail Nanjiani were my favorite guest stars this season, with their downright hilarious performances.

For those that loved the original show, this Event Series did not disappoint and is very much made with the elements that were so loved from the beginning of the series. New viewers will not get a lot of the jokes that the writers have with the viewers who have watched since the beginning, but they may still find it interesting and unique in comparison to what is popular on TV today. The Event Series is worth a watch for anyone who watched the original series or has an interest in aliens, the supernatural and government conspiracies.

The X-Files Event Series up for pre-order on Amazon.com.