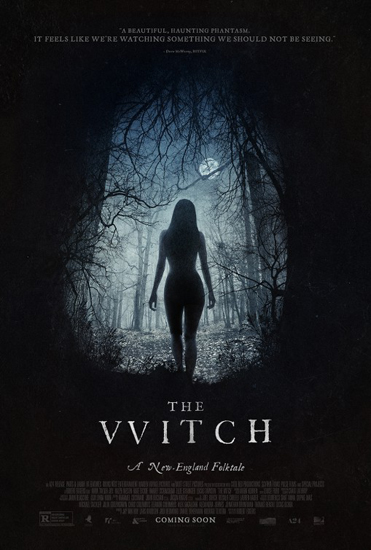 Synopsis: A family in 1630s New England is torn apart by the forces of witchcraft, black magic and possession.

Our Thoughts: ‘The Witch’ follows a Puritan family who leaves the plantation they were living due to a conflict of beliefs. They build a house and farm of their own and begin the new lives. One day, their new born baby is stolen by a witch who lives in the woods, while their oldest daughter, Thomasin, is playing with him. The witch, portrayed as a creepy, naked elderly woman, kills the child, churns his blood and rubs it on her body.

The family is extremely religious and spends a lot of time praying and asking for forgiveness for their sins. Mother Katherine is particularly broken by the loss of her child. Having difficulty with their crops, the father, William, takes to hunting in the woods, despite the fears of a witch living within them. While they are out there, they encounter a rabbit with what can only be called sinister eyes.

Katherine blames Thomasin for the baby going missing, while twin children accuse her of being a witch. However, when the twins begin talking to their rather creepy goat, Black Phillip, Thomasin begins suspecting that they are the witches.  Further tension is created when Katherine thinks that Thomasin is responsible for her special silver cup disappearing. When the oldest son goes missing and is returned with a spell seemingly cast on him, the family turns on each other, succumbing to fear and accusing Thomasin of Witchcraft.

The film creates tension with it’s foreboding atmosphere and terrifying musical score. It is a drama driven story, centering around the growing fear of the family, who breaks down under the tragedy that befalls them. It uses historical realities to create something completely original. It concludes with a spectacular scene that you will not soon forget.

Anya Taylor-Joy was outstanding as desperate daughter Thomasin. Ralph Ineson and Kate Dickie were   perfect in their respective roles as distraught parents, fearing that their family has been cursed.  As a goat lover,  I have to give a special shout out to the goat who gave a wonderful performance as the menacing Black Phillip (and has his own twitter page!).

The film is thoughtful and builds slowly and artfully, with horrifyingly beautiful imagery. It does not rely on jump scare after jump scare as many modern horror films do. At it’s core, it is about humanity at a time in history when superstition  was prevalent, and what would happen if those superstitions were real.   I think that is is also probably the best film I have seen yet on the topic.  ‘The Witch’ has mass appeal as a meaningful story and is a horror film that even those who are not normally into horror will enjoy.