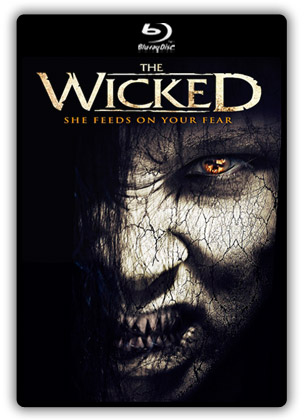 Synopsis:
Local stories warn that deep in the woods, a witch with a ravenous hunger feeds on the flesh of the young. In an abandoned house in the woods, she hunts her victims, trapping and torturing them in order to prolong her unnatural life. When another child goes missing, a group of teenagers decide to find out if the urban legend is true. What starts out as a meaningless dare turns into a blood-splattered fight for survival against a mistress of darkness.

Our Thoughts:
In an effort to begin this review on a positive note, the color correction for The Wicked is quite good. The color green pops out in a spectacularly natural way. Other than that, The Wicked disappoints on every level. Peter Winther’s direction is quite pedestrian, showing little flair or menace. The settings of the woods and the abandoned house provide ample opportunities for creative camera placement or movement, but Winther choses to play it safe, giving the viewer the same shots we’ve seen in a thousand mediocre horror films. Things pick up a bit in the witch’s sub-basement occult lair, but those scenes are few and far between. The potential for mood and atmosphere is totally wasted. There’s not even any good gore to get you through the Scooby Doo-esque shenanigans unless you like bad CGI’ed blood splatter, and if you are a true HNN believer, I know you don’t.

Michael Vickerman’s script gives us clichéd characters and endless exposition about people that really aren’t that interesting to begin with. The one character that doesn’t get enough discussion that we need to know more about is the witch. There are plot holes large enough to drive a truck through. Characters turn on lights in the abandoned house’s basement: who’s paying the electric bill for this hovel? After they turn the lights on, the characters still use their flashlights. Why? The witch cocoons up her victims and places apples in their mouths. How? Why? Does anyone care by this point? The acting is adequate, but the script doesn’t give the actors many chances to shine. The kidnapped girl (played by Caitlin Carmichael) is quite a good child actress but is regulated to screaming and crying for the majority of the film.

The witchcraft film is an incredibly under-utilized but fascinating genre that deserves better than The Wicked. With some cuts for language and nudity (don’t get your hopes up), this film could be easily mistaken for a SyFy/Chiller Channel bore-a-thon. If you are jonesin’ for witchy movies, watch Lords of Salem or Suspiria or The Blair Witch Project or even The Wizard of Oz. Leave The Wicked forgotten in the woods where it belongs.