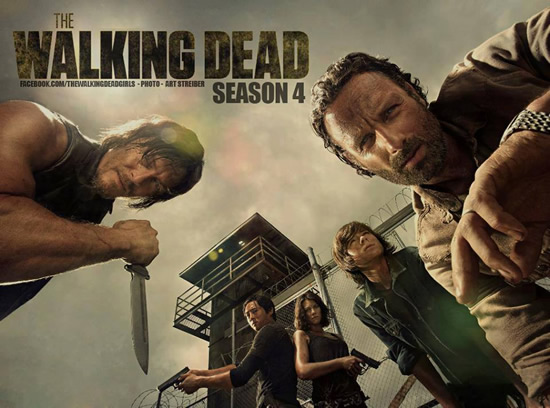 The Walking Dead – Weekly Wrap Up

Synopsis: The Season 4 opener finds Rick and the group aiming to maintain as close to an ideal life at the prison.

Thoughts: Well this is the moment “Walking Dead” fans have been waiting months for! Did it live up to your expectations? Just note *SPOILERS AHEAD*

I have to say the show began as sort of an apocalyptic “Little House on the Prairie.”  With so much farming, budding romances, and good will, I was starting to think the show may have lost some of its bite. Well, not so fast.  Not only are we introduced to a host of new characters from Woodbury, but also a slew of unforgettable walkers.

The scenes where Rick follows some random woman in the woods back to her “camp” tended to drag a bit, but ended in a surprising and meaningful way.  Also, the zombie roof collapse was sort of genius. I mean the cascading of biters falling in on the group was bloody fantastic. Kudos to the makeup and special FX team for that as well.

All in all, the scene in the store was a lot of fun, and the episode brought us plenty of gruesome walkers.  I’m not sure if I’m the only one who noticed, but it also brought us an overload of commercials too. However, the premiere was mainly focused on presenting to the viewers new characters and the prison’s new way of life.  Without giving too much away (although I can’t imagine “Walking Dead” fans missed this one), the episode did end on an intriguing note hinting at a greater sickness coming from within the fortress walls.  Until next week, steer clear of the virus!