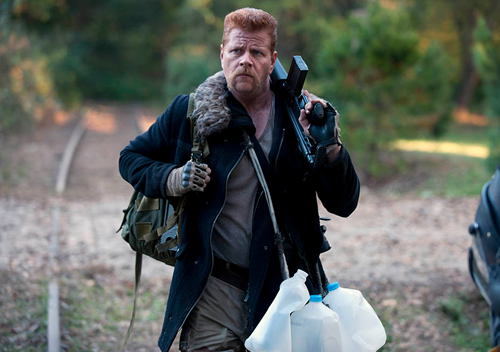 Synopsis: Faith becomes a survival tool for some fighting to stay alive.

Thoughts: **SPOILERS** Finally Terminus!! But what the hell is this place?  This week’s episode  also saw Glenn and Maggie reunite.  However, this came after a terrifying journey into a dark  tunnel of walkers, or was it? Horror fans appreciate the mountain of zombies Glenn  and  Tara  had  to overcome. I will say their trek through the chaotic walker wall would’ve been more horrifying  if the suspense was allowed to build. Instead fans were treated  to two minute intervals of the  scene cut in with a ton of commercials.

Daryl’s new crowd seems even a bit more obnoxious than anything he ever even experienced with  Merle. They are also the crew that came into the house where Rick and Carl had sanctuary. Methinks that bathroom strangling will no doubt catch up to Rick. I think it’s pretty clear the  vast majority of the group will meet up at Terminus.  Their journeys have brought new friends, as  well as enemies.

So, how will Terminus play out?  Will Rick and Joe’s crew clash? Is Terminus really the paradise  it appears to be?

See you next week after we wrap up the season finale.