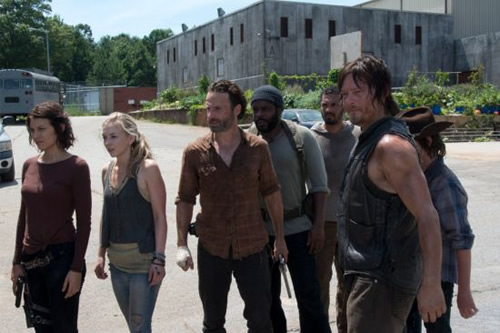 The Walking Dead Weekly Wrap Up – Too Far Gone

Synopsis: Just as things start to calm down at the prison, Rick and the group face imminent danger.

Thoughts: **SPOLIERS** WOW! The moment Walking Dead fans have been waiting for all season. While it felt like it took quite a while this point, it was well worth the wait. The battle at the prison was intense and just epic! The Governor, as ruthless as ever, once again puts ill–prepared people in danger by asking them to fight for him.

This episode was action packed with walkers, but also the human danger playing a huge factor. Fans say a brutal goodbye to Hershel, the voice of reason, and beloved character well played by Scott Wilson. Michonne finally gets her revenge and takes out the Governor, who although no one is really going to miss, was as a worthy foe to Rick and the group.  Maybe the saddest goodbye for some fans is Baby Judith.  Yes, this is where we see stellar acting performances not only by Andrew Lincoln, but also the young Chandler Riggs who grieve in a gut wrenching way while trying to survive.

This episode is a massive game changer as the group also says goodbye to the prison and is now splintered. It ends with so many open ended questions about what happens next.  I guess we’ll just have to see in 2014.

See you in February!