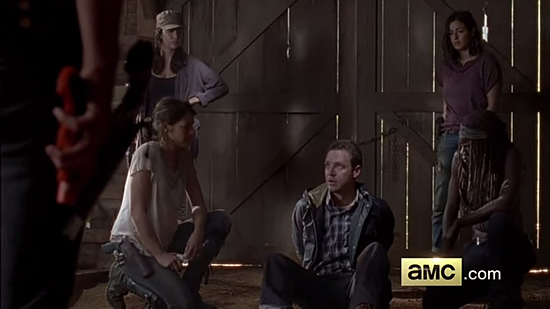 The Walking Dead Weekly Wrap Up – “The Distance”

The Walking Dead Weekly Wrap Up – “The Distance”

Synopsis: After a spectacular storm, Rick and the group meet a seemingly friendly person.

Thoughts: **SPOILERS**  Well the mystery of  Aaron is solved, or is it?  After the road weary crew puts him through the ringer, he does open up and tell them where his people and this utopian community is…Alexandria. Rick has shown this season, and again in this episode, that after all the loss and turmoil, he is taking no more bullshit.  Straight to the point, he does not trust anyone. It takes Michonne to pretty much reign him in. Just as an aside, I feel Danai Gurira’s presence is often taken for granted. Her strong female presence, as well as her exceptional and versatile performance as Michonne, very much stands out.

This episode features some pretty gory walker kills such as “flair gun walker.”  One of my favorite scenes, however, was Glenn’s zombie beat down by way of smashing his face into a rock.  Fans will see that Glenn has come a long way from “walker bait” being dangled down the well. He plowed through those walkers on Route 23 like New Englanders drive through snow on I-95. I also quite liked that little nod to Glenn’s RV days with Dale.

As the show ends, Rick and crew pull up to the gates of what promises to be a new beginning. Is this really the safe haven they are led to believe it is?  How long will this new hope last? Will Rick get a chance to shave his massive Grizzly Adams beard?