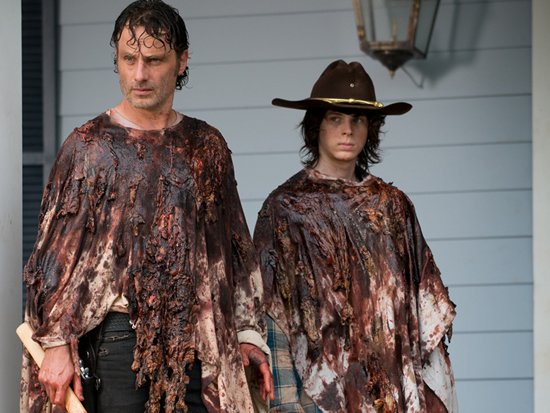 The Walking Dead Weekly Wrap Up – Start to Finish

The Walking Dead Weekly Wrap Up – “Start to Finish”

Synopsis: After having a few moments of peace, trouble finds its way into Alexandria yet again.  Only this time, the threat may be too big to defeat.

Thoughts: **SPOILERS** Well, there it is Walking Dead fans, the mid season finale.  While I even debated writing a wrap up due to the fact that the folks behind the scenes completely manipulated some fans through three filler episodes to get to this point, I still watched and am here to wrap up the first half of the season.

So here’s the low down.  The wall collapses, Maggie climbs up to the tower and immediately you know Glenn will see her at the end of the episode.  Besides the deluge of commercial, that’s my only kvetch, and now for the raw meat and potatoes.  The utter chaos that ensued once the wall was down and the nonstop action on many levels made this episode a great Walking Dead episode. Deanna’s death was imminent and as a pivotal Alexandrian, it changes the game for Rick in many ways.  Then besides the walkers, there were epic battles amongst other characters.

Let’s start with Carl versus Ron.  Last week when fans on social media were worried about Carl, I was scratching my head. Ron grew up in comfy Alexandria.  Carl was running out of the house and had to put his mom down after she turned.  Ron is no match for Carl.  As a matter of fact, Porchdick’s son and his antics led the zombies right into his house. Carl will be one of the last men standing because apocalyptic survival is all he knows.

Then we had Carol versus Morgan.  Morgan is obviously new to the Carol crowd.  If you question Carol’s instincts, she WILL cut you…and for good reason.  I won’t give away the entire fight scene, but it let the dangerous Wolf out. Don’t fret fans, I would find it very hard to believe that Carol or Morgan has anything more than a minor concussion.

This mid season finale embodied what fans come to expect from The Walking Dead every episode, which is why when it feels filler, it feels like a letdown. Will Rick and those covered in guts make it to the ammo shed all intact? Will Daryl, Sasha, and Abraham come back to help save the day? Will Glenn and Maggie have a predictable tearful reunion with green balloons? Will Carol wake up and give Morgan the beat down of his life?  Walking Dead fans will have to wait until February.