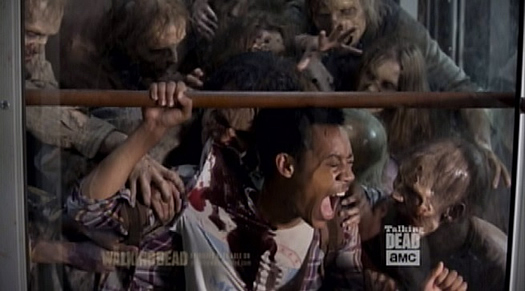 Synopsis: While trying to secure a new home, Rick and his group face challenges, and question the utopia they find themselves in.

Thoughts: **SPOILERS** This week’s episode of the Walking Dead proved to be one of the bloodiest in a long time.  Action packed from start to finish, the walkers, as well as the cowardice of Alexandria’s people, were relentless.  Being Greg Nicotero’s birthday, I’m not sure if Aiden’s death was a nod to “Day of the Dead.” His demise was extremely reminiscent of Rhodes from Romero’s 1985 classic, which featured a young Nicotero. Either way, it was as gory as it gets.

Also, fans find out that Alexandria is NOT perfect.  Their people lack not only survival skills, but also a total sense of loyalty to one another.  We also find that Pete, aka “porchdick,” may be even more so than originally thought.  Carol, of course, is on the case and thinking about his death as she bakes cookies with his son.  Am I the only one who finds the changes in Carol’s character fascinating and delightful?

With Tara’s fate in question, we say good bye to Noah, who went in quite a gruesome way.  Kudos to Eugene! The man with the mullet finally stepped up to the plate. All this as the priest sells out the group that has kept him alive.  With only a few episodes left, this one seems to be setting up for something explosive to go down in Alexandria.

How will Deanna react to losing her son? Will Tara make it?  Will Father Gabriel’s chat with Deanna affect their fate? Will Rick confront Pete? Finally, is there a way to get Chris Rock to do a narration over Noah’s death? (You know you all were thinking “Everybody Hates Chris”).