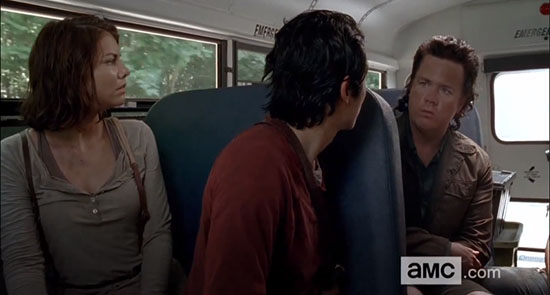 The Walking Dead Weekly Wrap Up – “Self Help”

The Walking Dead Weekly Wrap Up – “Self Help”

Synopsis: While on a mission, the group is confronted by new problems that test their ability to survive.

Thoughts: **SPOILERS** HOLY MULLET BATMAN!! First off, bravo to the Walking Dead writers for FINALLY addressing Eugene Porter’s obvious hairdo from hell. With that said, this week’s episode focused on the group trying to get Dr. Mullet to DC, with one obstacle after another.  Whether it was no transportation, massive amounts of walkers, or Abraham’s unpredictable mood swings, Maggie, Glenn, Tara and crew endured quite a bit. There were certainly plenty of action scenes and interesting walker kills to satisfy the true horror fan. Nothing was as horrific however, as Eugene’s revelation at the end.  You know… the one where he admits there is no cure and he’s not a doctor.  That stunning admission was probably the most horrifying part of the episode as it meant the end of actual, tangible hope.

Also on display this week was the development of Abraham’s character.  Up until know, Abraham has been this sort of a one dimensional general man on a mission.  This week showed that strong on the outside, doesn’t necessarily mean tough on the inside.  Michael Cudlitz gave a standout performance this week as the viewer sees Abraham’s back story and his character put through every type of emotion.

So what now?  Does the group head back to the church?  Will Abraham be able to move on? Will we finally see what happened to Carol next week?  Stay tuned…