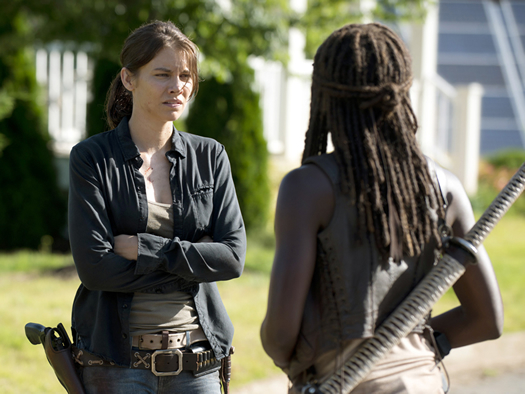 Synopsis: The mood in Alexandria is quite grim after a number of setbacks, which might prove too much for the sheltered citizens behind the gates.

Thoughts: **SPOILERS** Rick is back in town and just in time for Deanna to melt down.  Last night’s episode still left many questions unanswered about the fate of those not back in Alexandria yet. The show featured a lot of drama and Walking Dead fans saw relationships, good and bad, forming between some of the Alexandrians and the crew.  There’s Olivia and Tara and then there’s Carl and his teen rival Ron.  Methinks Ron is a tad afraid of Carl since Carl really has no issues with stabbing or shooting anyone or anything in the head.

Of course, the “OMG” moment came in the tunnel when Maggie is nearly killed by sewer zombies and Aaron jumps in to save her.  This is when she lets it out that she is pregnant.  Fans of the comic saw this coming, but nonetheless it was huge news for fans and a turning point for Maggie.  I would like to point out that Ross Marquand does an excellent job at portraying Aaron.  His character may have seemed like a minor one, but obviously his disclosure of the Wolves being led back inadvertently to Alexandria by him is truly a pivotal moment for not only the folks of Alexandria, but also for the show in general.

So is there really a chance that Glenn is still alive? Will Maggie make it through her pregnancy better than Lori? Where was Carol when there was still a random zombie left on the streets to confront Deanna?