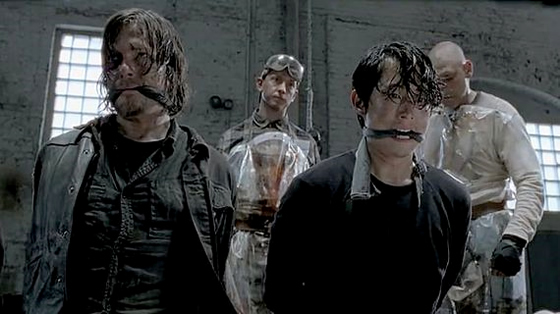 The Walking Dead Weekly Wrap up- “No Sanctuary”

The Walking Dead Weekly Wrap up- “No Sanctuary”

Synopsis: Rick and the group find themselves in a vulnerable situation in the Season 5 opener.

Thoughts: **SPOILERS** Walking Dead fans rejoice!  The series returned for your Sunday night ritual with a bang…literally. (I’ve really taken a shine to the new bad ass Carol) With an opening scene as gruesome as anything you may ever see on basic cable, the slaughterhouse proved to be not only terrifying, but also absolutely riveting. The writers and directors did not disappoint fans. This action packed episode saw the group’s brutal escape from Terminus, as well as a few reunions.

The walker scenes and kills were on par with what we have scene.  However, the human brutality that boils to the surface when the apocalypse hits the fan proves to be more horrifying, as shown in the season premiere.  As to where our hardened, by any means necessary group will land? That is up in the air.  Something tells me though we have not seen the last of Gareth and the rest of the surviving butchers from Terminus.