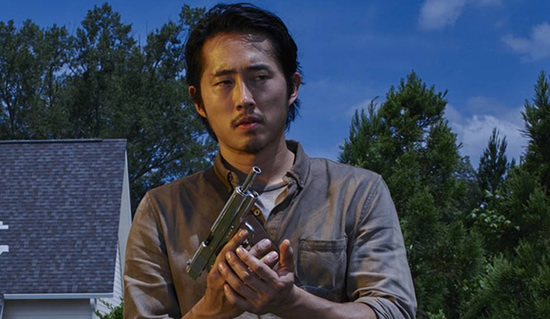 Synopsis: Alexandria is finally able to pull itself back together; and there’s peace between the group and Alexandrians, but no one knows how long it will last.

Thoughts: **SPOILERS** After baiting the Walking Dead die hards for weeks with mostly filler episodes, fans finally see Glenn  is still alive.   This is the moment where The Walking Dead is officially a mainstream drama and not a show for a hardcore horror fan.  Zombies are not as much of a scary threat?  If 75 zombies are surrounding Glenn under a dumpster and he makes it out without even on bite or scratch… The one positive of this is that the writers did not write off a major character in such a lame way as being knocked off a dumpster.

Great to see Carol back in action!  She has become, without question, the most interesting character on the show.  We all knew Ron was going to be a bit more of an issue than teen angst since the first episode of the season; however, he is no match for Carl. Also, with the wall going to completely collapse, they all have bigger problems with a swarm of zombies coming in, or do they?  I mean it feels a bit predictable now as to who will always be safe to please the mainstream. Is that bad? No.  Do horror fans feel a bit disenchanted?  Maybe.  Will Glenn eventually see his end the same way he does in the comic?  Since its prime time, maybe not exactly and maybe he won’t see it at all.

Will everyone survive the wall collapse?  How will Carol deal with Morgan’s secret patient?  Will I feel it necessary to write another wrap up after feeling disappointed after the predictability of AMC herding people to the mid season finale with Glenn’s faux death?