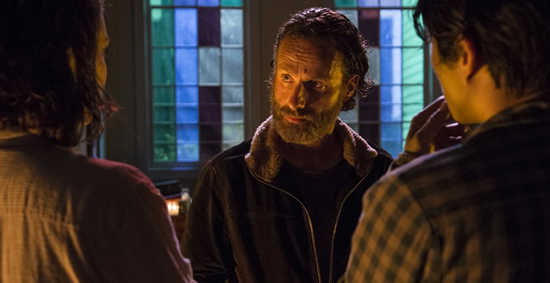 The Walking Dead Weekly Wrap Up – “Four Walls and a Roof”

The Walking Dead Weekly Wrap Up – “Four Walls and a Roof”

Synopsis: Rick the group find themselves pitted against some nasty people

Thoughts: **SPOILERS** With this week’s Walking Dead episode beginning with “TAINTED MEAT,”  how could fans not expect another killer show?  The scene turns particularly gruesome when the Terminus crew meet up with Rick and the gang.  Rick and company go after the group, bludgeoning them in an absolutely savage way.  That scene right there shows how hardened the group has become at this point their apocalyptic journey.  One of the most unnerving scenes was cannibalistic leader, Gareth, focusing on Baby Judith.  I think that also brought the human tension to a head.  Mixing both the drama, suspense and gore in a perfectly balanced way, this week’s episode delivered.  So, where have Daryl and Carol been? Where is Beth?  What is to become of Glenn and Maggie now that they’ve set off to DC with Abraham?  Stay tuned…