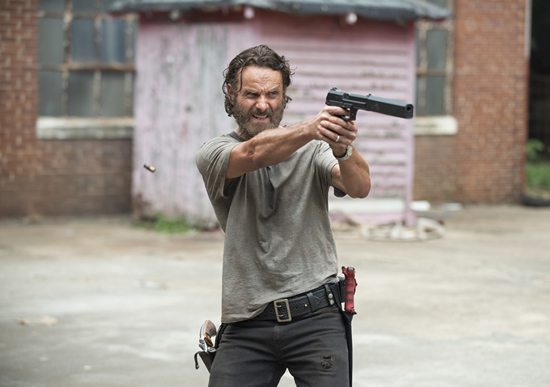 Synopsis: A rescue mission while attempting to hold down the church leaves the group spread thin.

Thoughts: **SPOILERS**  Last night’s episode of the Walking Dead kept fans anticipating that really big moment where Rick, Daryl, and company storm the hospital. This, of course, did not happen.  What we saw was a glimpse of what was going on with the entire group in different areas.  While the episode tied the story of the group back together, it also dragged at times which seemed to be done deliberately to hold off the inevitable epic battle for the mid season finale.

With that said, there were some definite highlights.  For me, these included Maggie putting Abraham in his place, the unknown ramifications of the priest escaping and leaving the floor opening, and of course Daryl’s incredible zombie head bitch slap across the face of one of the hospital cops.  By the way, Sasha should have known better than to turn her back.

While the episode showed the group coming together, it also left the viewer feeling a bit like they knew nothing was really going to happen until next week.  Will the original group ever meet up again?  Will Maggie ever wonder what happened to her sister?  Will everyone in Rick’s crew make it out of the hospital alive?  Stay tuned…