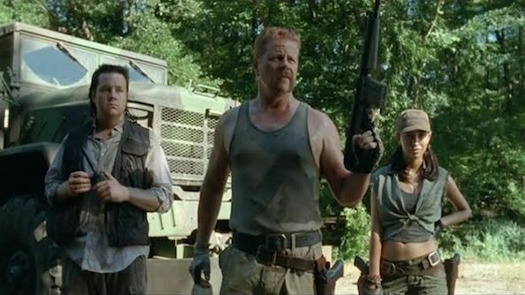 Synopsis: Rick is faced with multiple immediate threats, while rest of the group members deal with the past.

Thoughts: **SPOILERS** This week’s episode began with an gory, bloody zombie smackdown by Abraham, showing a lot of promise.  During the rest of the episode, we pretty much spent much of the episode watching Rick hide under the bed. Sure a little suspenseful, but as you probably predicted, Rick made it out okay. A slow moving episode. However, it showed Michonne and Carl on a supply run dealing with some of their emotional scars.  The show was peppered with cool zombie kills and an intense battle between Glenn and Abraham, who is proving to be a fiery and interesting character.

Will the group ever meet up? Will they find a safe haven? How is the scientist, Eugene, keeping his mullet cleaned up during the apocalypse?

I guess we will have to watch next Sunday to find out.