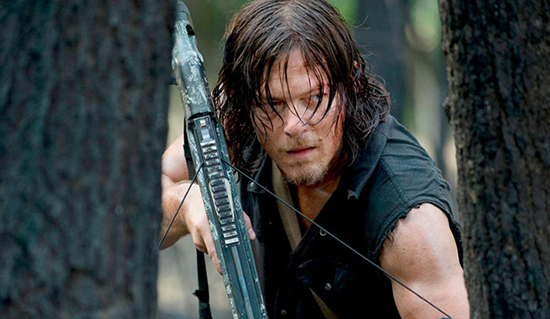 Synopsis: Daryl, Abraham, and Sasha run into multiple obstacles, including a new threat, while trying to return to Alexandria after the mission.

Thoughts: **SPOILERS** This week’s Walking Dead episode without a doubt showed new human threats, however, the ones who ran off with Daryl’s crossbow may not be the most dangerous.  The show started with Daryl getting separated from Abraham and Sasha, and then taken hostage.  Now I personally was not buying he was ever in danger.  Not just because I don’t see Norman Reedus being killed off anytime soon, but also because the characters felt weak.  When the bigger group they were running from presented themselves, THAT right there seemed to be a greater threat.  They were much larger, armed, and very well organized.

There was also a bit of introspection from Abraham and a new dynamic developing between him and Sasha.  With lines like, “loose ends make my ass itch,” and “I like the way you call bullshit,” he really knows how to sweet talk a girl!

In the end, we see Darryl finding a truck and reunited with Abraham and Sasha to head back to Alexandria.   Methinks we will see Daryl’s sorry ass hostage takers somewhere down the road…maybe zombified, maybe not.

Will Daryl ever get his crossbow back?  Are Abraham and Sasha going to have a post apocalyptic romp? Have Walking Dead fans come to accept that they won’t have closure on Glenn for a while?