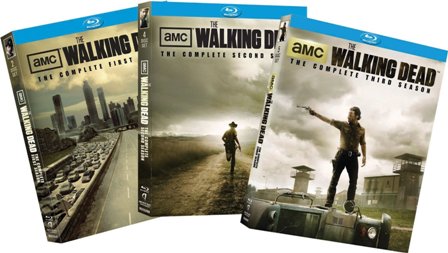 AMC will be releasing a boxed set of the first three seasons of The Walking Dead on Blu-ray with a special T-shirt included in the package.  The entier set will be released on June 3rd.

After waking from a coma in an abandoned hospital, police officer Rick Grimes finds the world he knew gone – ravaged by a zombie epidemic of apocalyptic proportions. Nearby, on the outskirts of Atlanta, a small encampment struggles to survive as ‘the dead’ stalk them at every turn. Can Rick and the others hold onto their humanity as they fight to live in this terrifying new world? And, amidst dire conditions and personal rivalries, will they ultimately survive one another? AMC’s The Walking Dead is an epic, survival adventure series from the director of The Shawshank Redemption and the producer of The Terminator and Aliens.

When the world is ravaged by a zombie apocalypse, police officer Rick Grimes (Andrew Lincoln) and a small group of others struggle to stay alive as ‘the dead’ stalk them at every turn. Can Rick and the others hold onto their humanity as they fight to live in this terrifying new world? And, amidst dire conditions and personal rivalries, will they ultimately survive one another? Based on Robert Kirkman’s hugely successful and popular comic book series, AMC’s original series T” is an epic, edge-of-your-seat drama where personal struggles are magnified against a backdrop of moment-to-moment crisis. A survivalist story at its core, the series explores how the living are changed by the overwhelming realization that those who survive can be far more dangerous than the mindless walkers roaming the earth. They themselves have become the walking dead.

In this uncertain world, Rick Grimes (Andrew Lincoln) and his band of survivors must not only fight the dead, but also face a whole new fear: the living. In this 16 episode season, the series Entertainment Weekly called the “greatest thriller ever produced for television”, Rick and his fellow survivors continue to seek refuge in a desolate and post-apocalyptic world and soon discover that there are greater forces to fear than just the walking dead. The struggle to survive has never been so perilous. This season also introduces new characters, including the Governor (David Morrissey) and fan-favorite Michonne (Danai Gurira), along with her zombie pets.