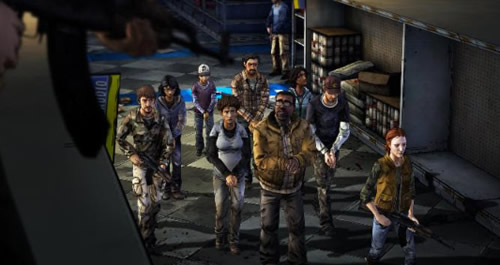 Synopsis: When the group is captured by Carver, Clementine must go to drastic measures to escape from his grasp.

Our Thoughts: SPOILERS BELOW –

While this episode was not as exciting as the last, it is made worth it with what can possibly be the most gruesome kill scene in video game history.

Episode three picks up immediately after the second episode and we quickly remember just how hostile our captors are. With every beating, physical and mental the group receives, our anger towards Carver grows.

After a slow build, the team decides that they can die as prisoners or they can try to fight their way out. Decisions are made and Clementine, the youngest member of the group, rises to the occasion.  Before the group exits their prison, Kenny delivers justice to Carver in the form of a crowbar. If the player chooses to watch justice being served, we are treated to an absolutely brutal beating or Kenny’s crowbar meeting Carver’s face, over and over again.

With chaos building and zombies bearing down on their location, the team decides they have to rub zombie guts all over themselves to try to blend in and escape. Things don’t go exactly as planned and the episode ends quickly, in the midst of a zombie battle.

Episode three had moments of action but it was mostly an episode which made us hate Carver and his gang more. What will come of those tough decisions we made at the end of this episode? I guess we will have to wait until episode four to find out.