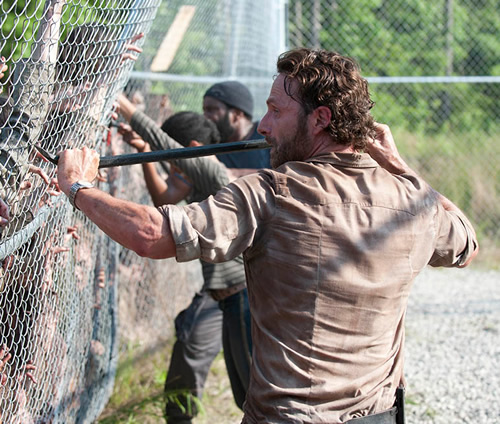 Synopsis: A brand new enemy has the group fighting to protect the life they built at the prison.

Our Thoughts:  Zombie Patrick feeds on some fellow survivors and all hell breaks loose on D-Block. Rick, Daryl, Glenn and others rush to the rescue, but not without suffering casualties of some of the prison newbies.

This episode was pretty action packed with hoards of walkers almost bringing down the prison gates.  After an intense Battle, Rick leads the zombies away as he feeds the pigs to the hungry undead.  The gore and guts displayed show the remarkable talent of The Walking Dead’s Special FX crew.

While this episode was action packed, the chaos was punctuated with some very poignant scenes. First off, we see a total shift in Carol’s character from the first couple of seasons.  She lets two small girls say goodbye to their bitten father, then stabs him in the head.  Carol is also flat out adamant about reaching the kids about survival.  She is now a hardened vet or the apocalypse.

Meanwhile, we see a very human side of Michonne as she cries as she holds baby Judith.  Now THIS is truly a first, and maybe a hint at her past.

While at times fans can see a bit of predictability now, I don’t believe The Walking Dead has lost its bite. The show ends with Tyreese finding the charred remains of two fellow survivors. The intrigue of The Walking Dead continues to grow, as now there are several threats within the prison walls.  From previous seasons, we know that this show will lull the audience into a comfort zone, then shock the hell out of you.  Can’t wait to see next week!