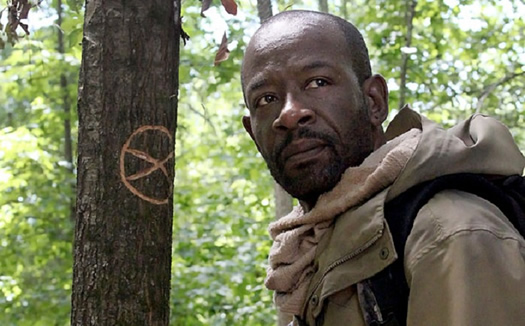 Synopsis: Daryl finds himself in trouble while out on the run. Meanwhile, in Alexandria, Rick and his group continue to feel like outsiders as danger lurks near the gates.

Thoughts: **SPOILERS** Well there was a ton of hype around the season 5 finale of The Walking Dead, but did it deliver the goods?

One of the biggest developments, which has been teased throughout the season, was the return of Morgan. We first see him Morgan whooping ass of a new evil crew of “Wolves,” which answers the question of the W emblazoned on some of the walkers’ foreheads.  It is then predictable when Aaron and Daryl fall for their trap of a tractor trailer truck load full of zombies.  This impossible situation, of course rectifies itself when Morgan shows up and the internet does not break. The two also lead him back to Alexandria, where the show ends with him meeting up with Rick. A great heartwarming moment, but also good to have Morgan there as I’m sure this new sinister group will be a force to be reckoned with next season.

Nicholas shooting Glenn and the battle between the two was great. However, all conflict ended peacefully, except of course for poor drunk Pete. Even Father Gabriel, the groups Benedict Arnold who left the gate open to Alexandria, seemed to find redemption. Everything surrounding Rick Grimes was done perfectly and very well played by Andrew Lincoln.

One of the biggest highlights for fans, not just this week, but all season, was Carol.  Her intense scene with Pete where she is ready to slit his throat, especially if he does not wash her dish before returning, was spectacular.  Melissa McBride has nailed this character’s development perfectly.

Don’t get me wrong, this was a very solid episode of the Walking Dead with drama and action on all fronts.  Last week’s episode ended which such a punch, literally, that the finale seemed like it was going to be epic. Combine that with the hype people around the show putting teasers out on social media, I think fans expected something more. The show had a lot going on and was building up in intensity on all fronts and then ended with everyone just stopping. The ending felt a bit mediocre.

So what’s next?  How will Alexandria deal with their new reality? How will they all deal with a much greater evil in the woods?

See you in October…