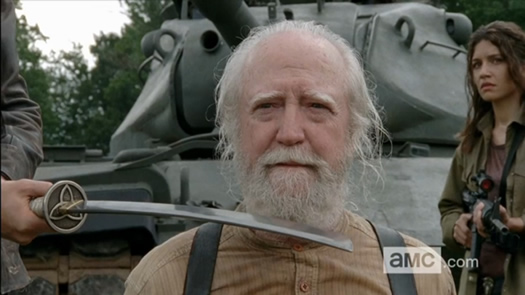 Well my fellow Walking Dead fans, we’ve survived another roller coaster season.  But how did those on the show fare?  Below are what I consider the most memorable moments of Season 4.

This year was a turning point for many characters on the show. However, one of the most shocking was Carol.  Once a very timid, almost weak character, this season saw Carol no longer the grieving mother, but the female warrior with no boundaries.  Melissa McBride pulled off this transformation flawlessly.  She stood her ground and insisted she was right to set the sick people in the prison on fire.  Carol does not play around anymore.  Don’t believe me? Just ask Karen, or Lizzie, or…you get what I mean.

Carl is obviously growing up, and not just because he is almost as tall as his dad now.  Because he has been in the survival of the fittest mindset since childhood, but in his early teens he is already a man.  From yelling at his dad and hating him, to loving him and showing he misses his childhood, Carl is definitely a teenager, but with a very different skill set than most.  Chandler Riggs was exceptional as a young actor going through such a wide range of emotions throughout the entire season.  Carl is a force to be reckoned with, don’t kid yourselves otherwise.

3. Lizzie, what have you done?

Remember the moment when we see Lizzie covered in her sister’s blood and baby Judith lying on a blanket next to poor Mika as the next experiment?  Of course you do! This was not only shocking, but quite honestly, really unsettling. In an episode which at first appeared pretty tame and uneventful, the writer’s once again threw an unbelievably gruesome curveball at us.

The beheading of Hershel was memorable because it was a brutal scene to watch, as well as emotionally wrenching to see his daughter’s watching helplessly.  His death was also a turning point in the entire series and the evolution of the group.  Hershel was the voice of reason, values, and most importantly, hope.  After his death and the group finds themselves fighting every second for survival, all hope and values go out the window.  There is no foundation, no voice telling them not to lose their humanity.  Hershel will be missed by the group, as well as the fans.

1. The Bite Heard Around the World!

Rick Grimes, the leader, do-gooder, once criticized by Shane for being weak showed in the Season 4 finale that he is prepared to do anything to survive and protect his son.  Yes, all saw old Joe with a gun to his head and every vein in Rick’s forehead pulsating as he watched his son being physically attacked, but I don’t’ think anyone saw what was coming…especially old Joe. Rick out of options took a massive bite out of Joe’s neck and killed him in the most grisly human kill scene we’ve seen on the Walking Dead.  Rick’s transformation has been a long and painful journey.  At this point, it’s survival by any means necessary.  Joe’s neck…CLAIMED!

See you next season Walker Stalkers!