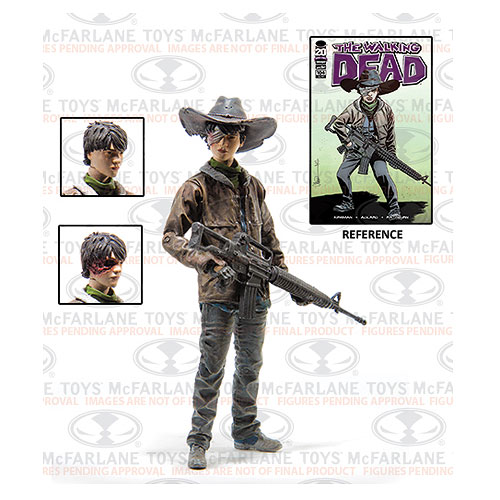 The Walking Dead Comic Series 4 Carl Grimes Action Figure features the bruised and battered Carl Grimes in his classic button up shirt, scarf, and two alternate heads – one displaying the bloody bandage wrapped around his head, as well as a head that shows the damage from the bullet. Carl Grimes stands about 4-inches tall and includes an assault rifle, and a removable sheriff hat.Battle hardened from the loss of life around him, Carl Grimes was forced to grow up fast in this zombie-ridden apocalyptic world. Carl continues to be one of the most formidable survivors, yet struggles to retain his humanity because of it. While the Safe-Zone was being overrun by zombies, Douglas Monroe fired off frantic shots while being devoured…one of those stray bullets hit Carl in the eye, nearly killing him. Carl pulled through, but was left blinded and scarred on the right side of his face.