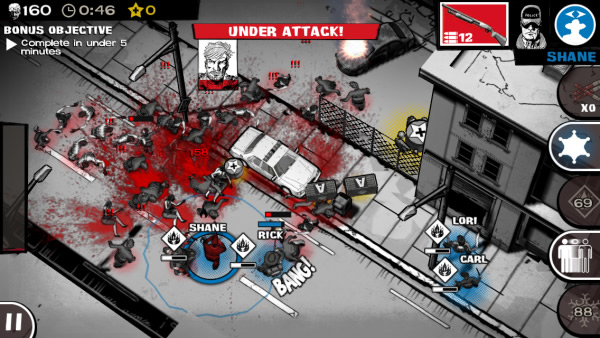 The Walking Dead: Assault was released on Dec 1st 2012 on iOS to wide acclaim from respected outlets including Eurogamer, Kotaku and Penny Arcade Report. Players and fans also loved the game, giving the game an App Store rating average of 4.5 Stars from almost 9000 user reviews. The game was the first action-orientated game from  The Walking Dead  world and begins where Rick wakes up in Hospital, to an entirely changed world.

Players assemble and upgrade their ultimate team of four, chosen from  The Walking Dead  favorites: Rick, Michonne, Carl, Glenn, Shane, Andrea, Dale and others. Players utilize the characters’ unique abilities to fight their way through the undead hordes while completing bonus objectives and challenges to unlock exclusive content from  The Walking Dead including artwork, wallpapers, behind-the-scenes trivia, and Game Center achievements. The game allows players to collect future episodes that parallel the ongoing comic timeline. Players can join The Walking Dead  universe and prove their skills to other players with Game Center leaderboards, four levels of difficulty and endless possibilities for challenges.

The Walking Dead: Assault  features authentic locations from comic book series all visualized in a 3D art style based the comic series iconic look. Playing as their favorite characters from the books, users can trigger distractions including flares and car alarms in order to keep their team safe from walkers, all while utilizing intuitive controls designed for touchscreen.  The Walking Dead: Assault  features a Universal App allowing a one-time purchase to run on all of the purchaser’s Apple mobile devices. The game is optimized across to run on all major iOS devices.