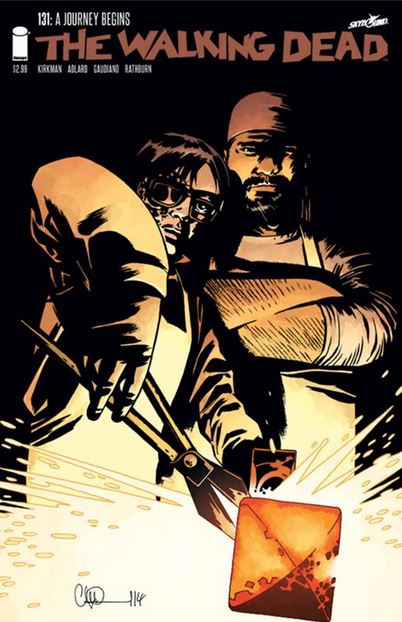 As we patiently wait for the fifth season of the TV juggernaut version of The Walking Dead, Robert Kirkman continues to rewrite the rules and ramp up the anticipation with the comic version.  Issue 131 continues the recent theme of introducing us to this new world order, where the humans and their communities are thriving with little interference whether living or undead.  Slowly, old friendships are being renewed and absent characters are having their whereabouts divulged one clue at a time.  But as we learned at the conlusion of issue 130, there are couple of new developments that promise to throw a wrench in this utopian facade.  And luckily for us, both are explored here with aggresive gusto.
When we last left the action, Rick and Carl had just arrived at The Hilltop, with the younger hoping to begin the next phase of his fast-track to adulthood right away.  Carl receives some good news while speaking with Earl, the blacksmith.  He’s also reunited with Sophia, both childhood friends already having been through more struggles and violence than most people do in their entire lives.  This is what passes for childhood in this wasteland, and both are happy to be in each other’s lives again.  Rick and Hilltop leader Maggie have a heart-to-heart, confirming that heavy is the head that holds the crown.  Neither asked for this, but their conversation confirms that both have the qualities to oversee this new reality, as reluctant as they may be.  It is also revealed that an important character, conspicuous by her absence, is indeed “gone.”  That’s a nice cliffhanger for us to frustrate over until next month, per Kirkman’s insistance.  New characters are introduced in this issue as well, with at least one hinting at an interesting backstory which could play out in the next few issues.  Ordered to form a search-and-
rescue team for Ken (the unfortunate soul left for dead by his partner Marco), Dante speaks casually about his infatuation with Maggie and the game he’s unsuccessfully playing to woo her.  That is, of course, before the party is surrounded by a horde of walkers.  Nice touch by Kirkman…..force the reader to get invested and then have us face the possibility that it was all for naught.
The two main events that do occur should have long-lasting ramifications, although on different levels.  Continuing with the notion that the zombies are becoming “smart” and communicating, we see this potential game-changer for ourselves for the first time.  Who needs Negan and the Saviors when the original bad-guys could start cursing just as loudly, right?  This notion is exciting, if for no other reason than it provides the platform for the walking dead to evolve, something not explored on a wide scale since the comic began.  This storyline is only two issues long so far, and the buzz is real.  This must’ve been what Kirkman was talking about when he declared that the entire landscape of The Walking Dead would forever change after the “All Out War” series.  Nice job, captain.  We cannot forget about Alexandria, of course, which is currently without it’s central leadership (other than Andrea).  Though they didn’t fall for Negan’s mind games, Magna and her friends are still determined to find some answers of their own and are willing to take important hostages to do it.  Let’s not forget…..trust is a two-way street.  In the TWD universe, who knows if trust can even really exist at all.
With such an emotional content (no tragedies, more of the personal bonding type), Adlard, Gaudiano, Rathburn and the crew are masterful in portraying the facial expressions and humanity that these characters feel.  The characters have every reason to believe that things are looking up and the future could be bright (at least compared to the last couple of years), but the overal tone remains a bit dark and ominous.  This is exactly what we’re looking for.  As the residents of these safe havens create wine and steel products and tools, the threat that has always lingered on the other side of the walls is still present.  And whether it’s human or undead, it finds a way in.
Issue 131 is again well-suited for building the rising actions, while posing two potential climaxes on opposing but deadly fronts.  We have indeed entered into a new era of The Walking Dead, and although many of the faces are the same the threat is progressing (and surfacing).  We have to wait another month to find out which threat strikes first, but it’s obvious that the communities are about to feel a lot less safe than they have been.  Though he’s still imprisoned, I’m sure Negan is smiling from his ironic jail cell.