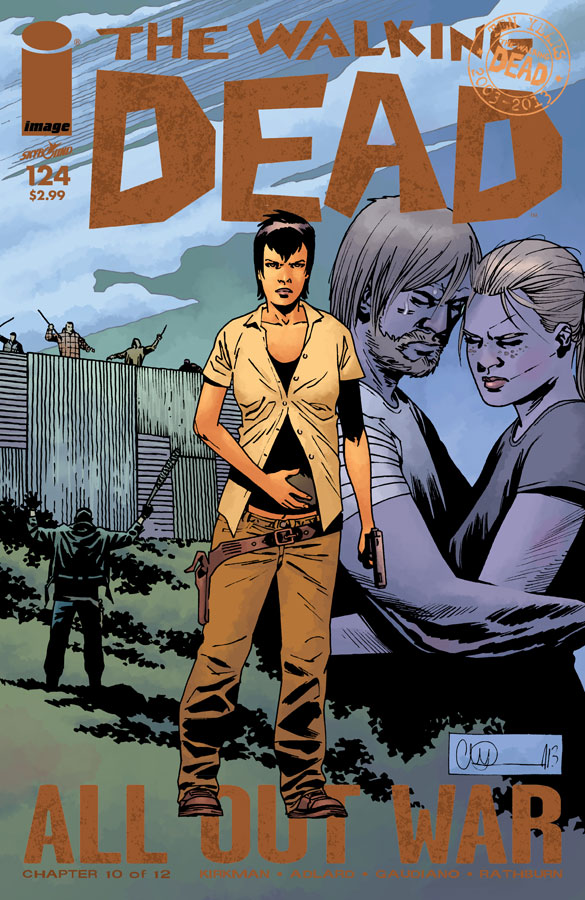 Only three issues to go in the “All Out War” storyline (including issue 124), and writer Robert Kirkman is
determined to dig both sides in for a final, decisive battle.  But when…..and where?  As has been demonstrated
throughout the entirety of its run, The Walking Dead is perfectly fine with letting story archs and the fates of
characters drag out and continue on, seemingly into perpetuity.  The apparent rule of thumb in this post-
apocalyptic universe is that “if it didn’t happen to Rick, it’s not necessarily a big deal.”  Which makes the
conclusion of issue 123 that much more baffling, as Mr. Grimes was felled by an arrow shot through his midsection
by the shadowy, and hard-to-gauge, Dwight.  Not just any arrow, but an arrow tainted with zombie gore that is known
to quickly turn an average living human into yet another undead ghoul.  So would we have answers in issue 124?
Well….yes and no.  Not exactly the answer you’d like to hear, but again in this world it’s all about the journey.

The first thing you’ll notice about issue 124, at least the first half or so, is that it’s DARK.  Sure, it
takes place mainly at night, but there’s something more to this than meets the eye.  There’s a foreboding charm to
the initial battle scenes, as the folks at the Hilltop battle Negan’s Saviors and rush the injured Rick into a
house to be looked at.  Each side wins a few skirmishes, but a hastily prepared counter-attack, led admirably by
the increasingly-indestructible Andrea, provides the firepower that wins this issue.  The Saviors cockiness turns
into confusion, and Negan leads his guys out of harms way and towards what they hope will be a temporary safety.
The sounds of living folks declaring war on each other with impressive firearms, with all of those pesky booms and
explosions, begins to bring on herds of zombies to the Hilltop’s walls.  So while Negan and his endless supply of
mercenaries escape into the unknown, the ASF is about to experience a horde at their gates unlike any that they’ve
dealt with before.  With several good guys mortally injured (though they don’t know it yet), they figure out
Negan’s plan with the gunked-up weapons and starts freaking out about Rick.

The back-and-forth flow to this war is apparent, and obvious.  After all, Kirkman has done a masterful job
of showing us all that Rick and Negan are, essentially, equals.  Sure, one is good while the other is a bad-ass,
but at the end of the day they need each other.  Each has had multiple opportunities to kill the other, and it’s
almost like they can’t bring themselves to finally kill the yin to to their yang (and vice versa).  So while fringe
players and even borderline key associates are killed off, “All Out War” chugs ahead at full steam just waiting for
one of the leaders to gain the upperhand.  It appears that Rick may finally be able to rest easy, with Jesus
looking out for him and Eugene racing back home with his team.  But then again, with Dwight playing both sides of
the fence there’s no telling how it could play out.  Negan might be on the verge of gaining a stranglehold over the
TWD universe, as the creator did warn us that things could change completely by issue 127.  Mr. Kirkman, you’re
certainly are a shrewd one.

As usual, Adlard and company are on point, particularly regarding the dark and ominous tones of the first
part of this issue.  Each character, particularly Rick and Negan, are a rollercoaster of emotions regarding their
people’s safety.  This is shown wonderfully by the artists.  Two more issues to go before the TWD universe is
“changed forever”…..the anticipation is brutal.