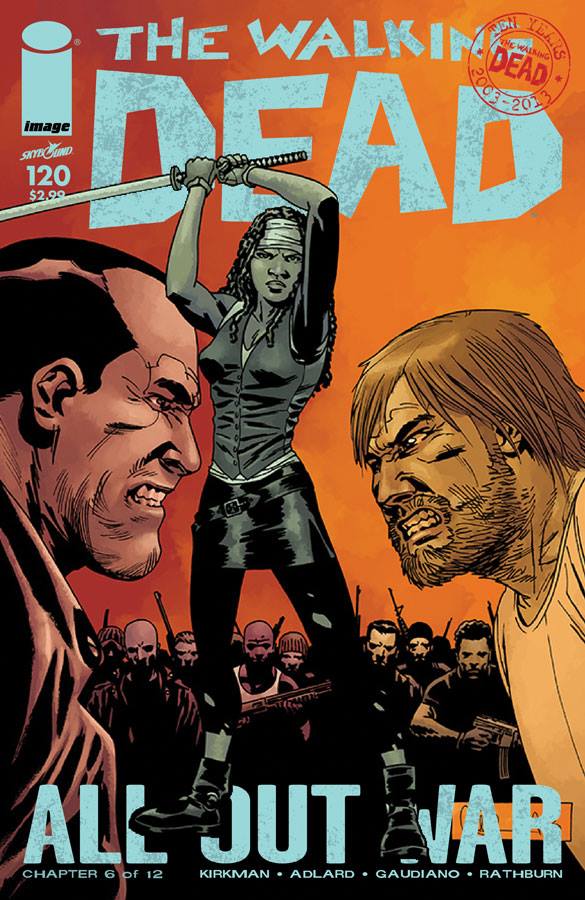 At the conclusion of The Walking Dead issue 120, we’ve officially made it halfway through the “All Out War” storyline (6 of 12).  And when we last left the action, Negan and the Saviors appeared poised to put a violent end to the Alexandria Safe Zone, once and for all.  Which begs the question…..how are there still six more chapters to this story arch, when our heroes are faced with such impossible odds?  But to ponder this question would doubt the road that Robert Kirkman has paved for his audience…..and after ten years, the man has earned this level of respect.  I’ll be the first to admit that I had wondered how Rick and the gang would escape the impending doom at the end of issue of 119.  Not only are these questions answered, but the latest installment invokes a level of emotion and violence unlike any other in recent memory.  Considering the amount of chaos and gore that the TWD universe has witnessed since issue 100 (particularly the last few issues), this is saying a lot.

What does issue 120 give us?  How about several gory scenes with atrocities being committed upon a couple of key characters, for starters?  This issue does a good job of including nearly all essential players, converging from numerous angles, and each making significant impacts.  The heroes fight valiantly in the face of certain annihilation, and manage to keep their composure as hand grenades rain down on them from the outside.  As I mentioned, Kirkman maims multiple good guys during the battle, and tough choices are needed to be made.  More on that later.  But two huge events turn the tide against Negan:  the betrayal by one of his men, Dwight, who voluntarily “loses” the grenades to Jesus, and the Hilltop, now led by Maggie, sending in reinforcements.  The Dwight situation is particularly tricky, as he claims to be doing it to prove his loyalty to Rick.  Of course, this is very similar to the backstabbing that Martinez gave the group back in the Woodbury/Prison storyline.  Could Mr. Kirkman be going to the well again, this time with much more disastrous results?  Again, we have six more chapters to find out.

In yet another instance of the comic imitating the show, at least for me, is between Denise and Heath.  On TV, Woodbury’s Milton is slowly dying (thereby turning into a zombie), but tries his best in the meantime to help out Andrea.  In the comic, Denise, facing certain demise, sacrifices her well-being to literally save Heath’s life.  This example works better than say, when Carl and Michonne began a personal relationship shortly after the show explored the same dynamic.  All events seem to work in Alexandria’s favor.  With exception, however, of the ultimate panel.  Negan, drawn with superb facial definition and devilish charm by Charlie Adlard, is overseeing a smoky potential wasteland where his antagonists were living.  Despite this moral victory, we get to see Negan’s first real failure in his honest attempt to kill Rick.  Thanks to their mutual respect, he’s been content to cause collateral damage due to Rick’s insubordination while never giving another thought to keeping him alive.  Rick, on the other hand, has failed miserably in every attempt to do in his rival.  This could represent both a turn in the tide of the war, but also in the supreme confidence that Negan seems to project in all situations.  More questions to have answered in the next few months.

Issue 120 keeps the action rolling, as the war is brought directly to Alexandria’s gates.  If nothing else, we now know that this conflict will be as “global” as a war can be in a post-apocalyptic zombie wasteland.  Since the last issue established that Negan has a seemingly-unlimited supply of henchmen, we can bet that he’ll be back at full force sooner rather than later.  Now with the help of Maggie and the Hilltop and Dwight’s infiltration, Rick and his allies may just have a fighting chance.  But fight is what they’ll have to do, because going back to the way things were is no longer an option.