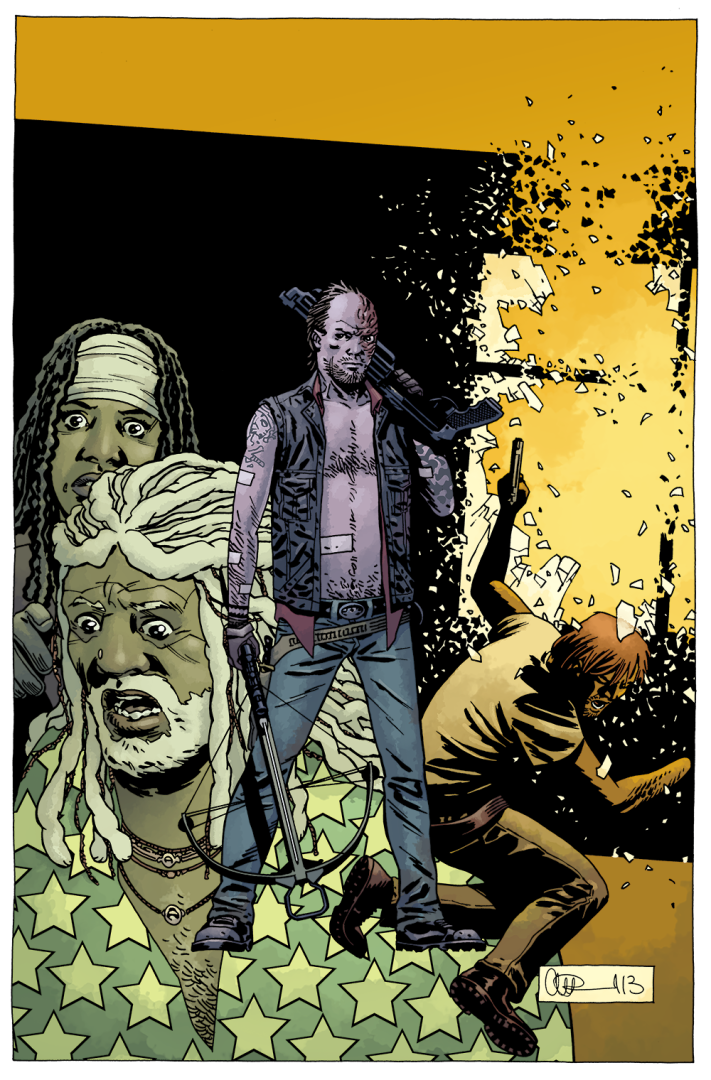 A big dose of reality hits our heroes in The Walking Dead #119.  Nobody ever said that war was easy, but the way Rick and the allies have seemingly run roughshod over Negan and the Saviors it was understandable that Alexandria was already feeling safer.  In this post-apocalyptic realm, safety is never guaranteed (nor is it promised).  Robert Kirkman is painstakingly methodical (and slow) in his story-telling; however, he also ensures that the end result is worth the journey.  While we haven’t yet reached the conclusion to the “All Out War” subplot, issue 119 reassess the current state of the survivors and ends with one of the best cliffhangers since The Governor was barking orders from the top of a moving tank.
We are given access to the most vulnerable sides of several characters as they change before our eyes (Ezekial breaking down, Rick beginning to question himself, Aaron ready to kill).  This is a very smart tactic by Kirkman and illustrator Charlie Adlard (with wonderful depictions of inner feelings boiling over), because these more-humanized folks are about to be put to the test.  Rick and his group returns to Alexandria after his successful pinning-down of Negan and destruction of one of his outposts.  Unfortunately, he learns of Ezekial’s failure and begins to devise a plan to cut-off Negan’s inevitable counter-attack which he theorizes is barreling towards their front door.   Apparently, they’re a bit off on the number-crunching because Negan, with Lucille and his army in tow, appear at the gates ready to “talk”.  While normally, a verbal discourse would be out of the question in this situation, Negan has actually shown a penchant for talking things out (to his benefit only, of course) throughout this current run of the comic.  Of course, the mutual respect between he and Rick, which is downright baffling at times, remains the only reason that our hero is still alive and breathing.  After the return of a missing resident, the pace picks up exponentially leading to the explosive ending and white-knuckled cliffhanger.
After numerous issues of inaction and false finishes, you really get the sense that All Out War is winding to a volatile conclusion.  It seems like Negan has brushed off at least half a dozen assassination attempts by Rick, and the only time he really made him pay was way back in issue 100 with Glenn’s murder.  There has to be a reason for this, and perhaps this is the big payoff we’ve been agonizing for.  There are a few questions that can be raised which are not answered here, but look promising for the next issue or so.  What’s going on at The Hilltop?  How did Negan and his men escape?  How many soldiers does Negan have anyway?  This last one really does keep me up at night, as the last year or so has seen the killing of at least 100 of the Saviors.  Yet, with each attack their numbers seemed to have been replenished.   Most likely, Kirkman does this to hammer home the point that this is a bad guy, and the threat he poses may never really be neutralized.  Rick and his combined forces may’ve won a series of battles, but now with the war at their own gates their time may just be up.
There are many reasons that issue 119 is worth the price of admission.  Several main characters continue on their trek towards an emotional breakdown.  Rick receives yet another reality check, and is provided an opportunity to prove his leadership ability yet again.  Most importantly, we’re left with an image that harkens back to the prison heyday.  And just like back then, we can’t wait until January 22nd to pick up where Kirkman leaves off.  But in true TWD style, there’s always a chance we’re left with more questions than answers.  We’ll see.