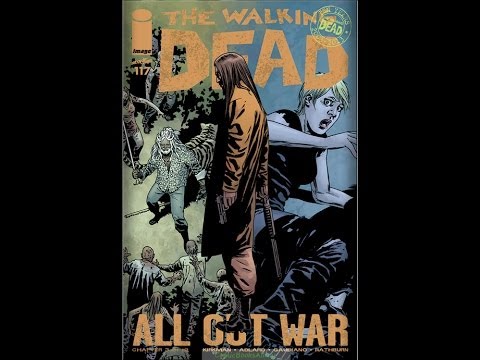 What’s the difference between Negan and The Governor?  Well……we could be here a while listing those out.  But the main distinction between the two for me?  I never actually sympathized with The Governor, which is something that I’m finding myself doing more frequently with each new issue of The Walking Dead.  Issue 117, which hit comic store shelves on Wednesday, November 27th (two issues in less than a month……WOO HOO!), continues this unfamiliar pattern of supporting villainy.  Mastermind Robert Kirkman strikes again!

When we last left our heroes, Rick and his allies from the Hilltop and the Kingdom had confronted The Saviors on their own turf, issuing an ultimatum that the charismatic Negan had essentially laughed at.   A mini gun battle, and the onslaught of a hungry zombie horde, quickly wiped the wicked grin off of his face, however.  While not a complete victory, due the capture of Holly by The Saviors, it was nevertheless a satisfying early outcome in the 2nd chapter (of 12) of the “All Out War” storyline.  So where does issue 117 pick up?  Exactly where 116 ended:  Holly deep behind enemy lines, and Rick’s group taking a break while the undead do their thing.  Rick is once again proving to his troops to be an able and willing general, while Negan continues his streak of escaping death and regrouping with the upperhand.  Michonne continues to tear down her emotional barriers as well, as she and Ezekial lead each other down the pathway to a romantic relationship.  Good, because we all know that did wonders for Morgan, Tyreese, etc.

As expected, there are more zombies to slaughter in this issue (something that is surprisingly lacking in recent editions).  To see the undead being used as a battle tactic is refreshing, rather than being relegated to post-apocalyptic window dressing.  With Rick doling out the attack and counter-attack strategies, Negan and his folks have time to rethink a few things while trapped in their compound.  And here is where we see the duality of The Walking Dead’s latest antagonist.  Though he’s committed multiple murders and countless atrocities, there still exists a code of honor and morals within him which will not be deterred, even in the face of their possible demise.  This is on display, as the prisoner is saved from a violent and torturous fate by the intervention of Negan, who harshly punishes the attacker for his evil intentions.  Even in a war where his men are pinned down by the undead and all hope seems lost, he refuses to let his men turn into monsters.  There’s a reason why Negan and Rick have developed a sense of mutual admiration for the way they conduct themselves, and issue 117 cements that bond even further.

Character shading and Negan’s nasty facial gestures are showcased with this issue.  The Adlard-Gaudiano-Rathburn dream team hits a home run here, as their string of success carries on.  Much like Rick’s army, these guys are battle-tested and up for the job.

We all know that the “All Out War” story arc has a ways to go yet, but with each new issue Kirkman provides a new wrinkle for the reader to digest.  Are we rooting for Rick or Negan?  Are both leaders only trying to protect his people?  Who will blink first?  I’ve had my issues with the pace of the story since Negan’s arrival, but if Image continues to set the dial to “break-neck” I’m fine with it going forward.  TWD Issue 117 is well worth the time and money you would choose to invest.