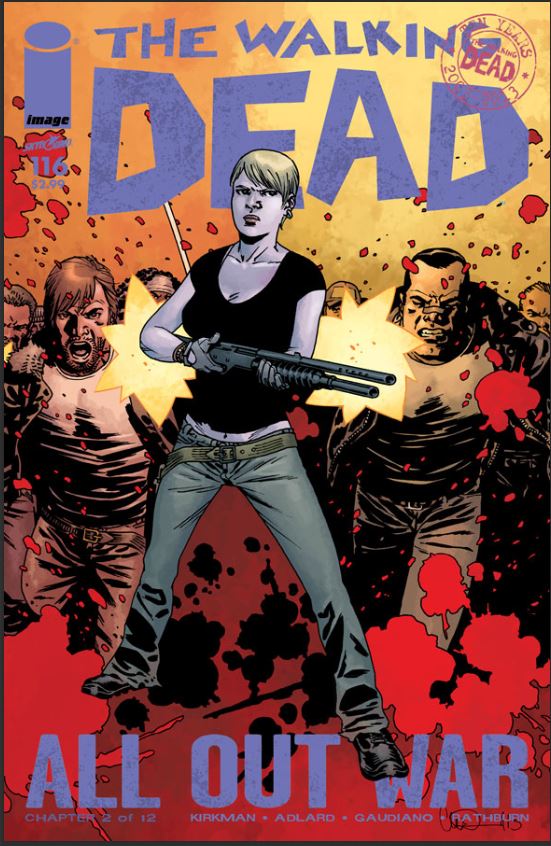 Indeed, it’s “All Out War.”  Issue 116 of The Walking Dead, which hits newsstands on Wednesday, November 13th, picks up right where issue 115 left us…itchin’ for a fight, and out for blood.  Would our bloodlust be satisfied?  It’s helpful to remember that in the TWD universe the journey is a marathon, not a sprint.  Keep that in mind, and all else will be golden.

When we last left the action, Rick was leading the allied forces of the Hilltop, Alexandria and the Kingdom and had pulled up right to Negan’s doorstep.  Ever the quick-thinker, the diabolical Negan had a trick up his sleeve in the form of an important hostage, Hilltop leader Gregory.  Would the Hilltop members desert the alliance, and leave Rick’s forces to fend for themselves?  Luckily, we receive a lot of answers in this issue.  There’s even a good ol’ fashioned firefight.  But despite numerous opportunities on both sides, the game of chicken between respected rivals Rick and Negan continues unabated.  Not that this isn’t a great storyline, because it certainly is.  It has dragged at times, but the last three issues in particular have more than made up for the lack of resolution and zombies with an abundance of bullets.

The fact that this is only chapter 2 of 12 in the “All Out War” story arc should be a strong indication that neither Rick or Negan are going away anytime soon.  This is a good thing; to me, Negan is the strongest villain the TWD realm has depicted.  He embodies the best of both worlds: the uncomfortable camaraderie that Shane brought to the table, along with a more calculated evilness than the Governor was able to portray.  For the first time in a while, the apocalyptic world around them, that which is filled with the undead, plays an integral part in the engagement.  The ghouls are used as a battlefield advantage by one of the armies, much like the way Alexander the Great would utilize the elements around him to defeat his enemy.  Perhaps that’s a little overly dramatic, but you get the idea.

And we get to see yet another background player, Holly, step into a prominent role.  The emergence of these fringe characters on both sides is always a little treat that Robert Kirkman likes to provide his readers…right before their ultimate sacrifice.  That’s not to say this is Holly’s fate, merely an observation.  The visuals from Adlard and company are stellar, as usual.

If nothing else, issue 116 of The Walking Dead tells us to dig in, because it’s going to be a long war.  Neither the Saviors nor the Alliance could agree on a peaceful solution, so the bloodshed will continue.  And isn’t that all that we want?