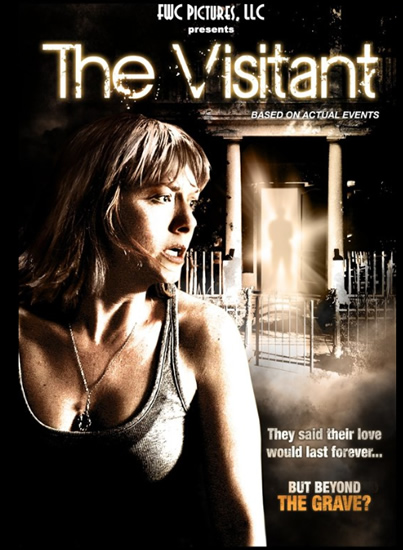 Synopsis:
A phony psychic helps a haunted woman banish an evil entity, but the malicious spirit takes up residence with the inadvertently successful exorcist.

Our Thoughts:
Written and directed by Jon Binkowski, The Visitant may be the first film to ever open with a quote from Tom Petty. Poltergeist films are tricky propositions in that there has to be a balance between feeling sympathetic towards the victims of the spectral disturbance and the desire to see those people tormented in the most horrific ways. The Visitant starts with a skillfully filmed sequence of a vicious ghost attack behind a closed door. The viewer worries for the safety of the screaming, begging woman but wants to see exactly what is so brutally violating her. The rest of the film doesn’t quite live up to the tension of this disturbing opening, but it does provide some nice thrills and well-choreographed manifestations of the supernatural. The haunting starts subtly with flickering lights, shaking bottles, unexplained noises, and whispers accelerating to souring milk, creepy images on TV, demonic voices, and physical violence. Scenes depicting fog encompassing a room and strange voices through an old radio are much more effective than the jump scares of cell phone ring tones and smoke detectors. Binkowski tends to focus forebodingly on objects, but there are much more effective ways to generate suspense. Watching characters have long conversations on cell phones and video chats doesn’t exactly make for compelling cinema, which is a shame because there are plenty of interesting props and set pieces in the film (folk art, ethnographic artifacts, a wicked cool robot collection) that could be used more creatively.

The film looks fantastic, and the soundtrack, filled with chittering industrial rhythms and distorted sitars, sounds like early Coil. The acting is uniformly fine with Sallie Glaner’s jittery, tormented performance as the original conduit for the malevolent spirit particularly standing out. Binkowski’s concept of hauntings acting like viruses passed on like infections is stimulating and a final red herring is well played. Here’s hoping that his next project finds Binkowski moving away from the tried and true and exploring more bizarre content because he certainly has the talent.