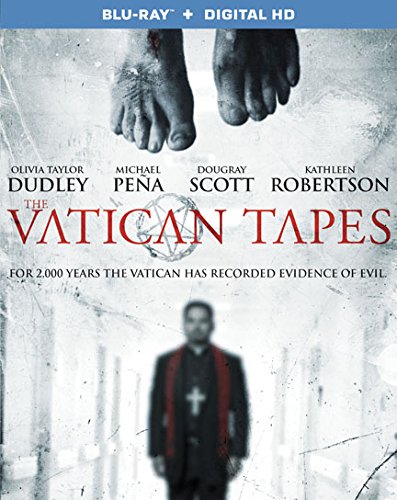 Synopsis: A priest and two Vatican exorcists must do battle with an ancient satanic force to save the soul of a young woman.

Our Thoughts: ‘The Vatican Tapes’ is a straight forward movie about satanic possession.  Parts of the film are presented as the Vatican’s archival footage, while others are filmed normally, giving a variety of camera views to tell the story.

The film centers around a young woman named Angela who becomes is the target of a possession. She begins acting erratically and after she causes a car accident, ends up in coma. When they take her off life support she miraculously awakens. However her odd behavior continues and she is checked into a mental health facility, where it becomes clear that she is possessed.

‘The Vatican Tapes’ doesn’t cover much new ground in the way of satanic horror. However the film has a slick, modern presentation. I found the climax to be a bit over the top, but I did like that it didn’t go the cliché route that these films usually take and I liked the note that it closed with.

Olivia Taylor Dudley is spooky as the possessed Angela and Michael Pena  is smart as Father Oscar Lozano. While it is certainly not the scariest film I’ve seen on the topic, it is fairly creepy and keeps the viewer interested. It would have been better with an R-rating and  showing the horrifying violent scenes in full, rather than cutting away. Fans of occult horror may or may not enjoy ‘The Vatican Tapes’, but the film is worth watching in this viewer’s opinion.