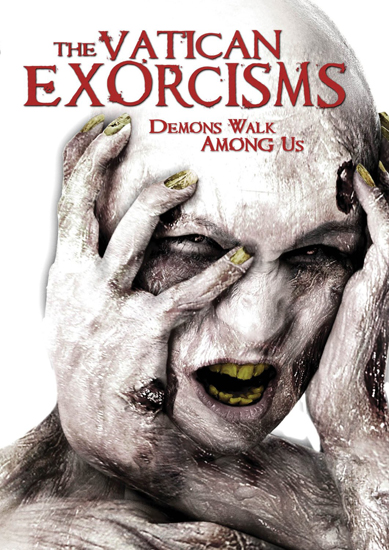 Synopsis: The Vatican Exorcisms was shot by Joe Marino, an American film-maker who went to Italy to shed light on the phenomenon of exorcisms. Accompanied by Padre Luigi, a true exorcist, Joe travels to the south of Italy, a place where the sacred and profane have always lived together, where Christian rituals are inextricably linked to the pagan ones.

Our Thoughts: ‘ The Vatican Exorcisms’ follows film maker Joe Marino on his quest to research the corruption in the Catholic Church and document the existence of the devil. The film claims to be a real documentary of real interviews.

The inclusion of real people and events at the start of the story help to it up as more believably factual. They proceed to interview Vatican whistle blowers and witness a black mass by a locals early on in the film. As they interview more people and witness exorcism after exorcism, the film crew becomes increasingly worried about Joe, who remains skeptical despite what they have seen.

While the subject matter of the story is interesting, I did not find myself particularly frightened by this film. Most of the film is in documentary style, however, the addition of intense music during certain scenes is inconsistent with the format. The lack of special effects make the documentary illusion more believable. The last third of the film does pick up in contrast to the first. Director and lead Joe Marino gives an excellent performance as the film maker and skeptic looking for proof.

I am a huge fan of the found footage style, but this film just didn’t do it for me. The lack of any real violence and scenes that drag on with little action, combined with nothing new to add to the genre, left me disappointed. However, if you’re looking for a tame, faux documentary style horror film about exorcism, then you might want to check it out.