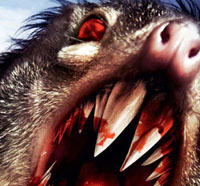 Every so often in Hollywood, someone decides to go to such extreme lengths to bring back something so long forgotten and bad and make it fun again.  The producers of Return of the Killer Shrews have made such a valiant effort.

The aforementioned film is a sequel to the 1959 Drive-In classic The Killer Shrews, bringing the original film’s star James Best (aka Sheriff Roscoe P. Coltrane from the Dukes of Hazzard T.V. Show) to reprise his role of Captain Thorne Sherman.

The original film dealt with a marauding band of killer mutant dogs that inhabit an isolated island. In the great Drive-In tradition, the “shrews” are in fact a science experiment gone wrong.

The sequel concerns itself with Sherman returning to the island nearly a half a century later to escortthe cast and crew of a reality nature show to the island.  Upon arrival, he quickly discovers that time does not heal all wounds and the shrew – now more vicious than ever – are still on the island.  As the body count mounts, Sherman and cast members of the reality TV program must band together to fight off the ravenous horde.  Clips from the original supplement the narrative as both personal flashback and plot set-up.

I have recently found myself liking more and more limited-budget films that do not take themselves seriously.  By embracing their limitations and relying more on tongue-in-cheek humor and self-effacing wit to keep the film engaging and fun.  Remember, sometimes that is the ultimate goal.

One such moment involves Best chatting with past and present co-stars John Schneider (“Bo Duke”) and Rick Hurst (“Cletus Hogg”) in the craft services area questioning if they all knew each other from time they may have spent in Georgia in the 1980’s.

At the end of the day, I enjoyed this sequel to a film that was featured and mocked on both Mystery Science Theater 3000 and This Movie Sucks!