In this time of unrest, we all need an escape once in a while and the folks at the Knoxville Horror Film Festival knew that they had to do something to continue their yearly tradition in the ugly face of Covid-19. So, instead of holding their normal full schedule of screenings at their home-base of Central Cinema in Knoxville, TN, they’ll be splitting screenings between the Central Cinema, Maryland, TN’s The Bird & The Book and the Parkway Drive-In, also in Maryland, TN, October 23rd – 25th!

The local and touring short film portions will be taking place between The Bird & The Book and Central Cinema while the Parkway Drive-In will be handling triple features on Friday and Saturday night: Friday will be J.P. Simón’s Pieces (1982), Sam Raimi’s Evil Dead 2 (1987) and Jill Gevargizian’s The Stylist (2020 – click here to read our coverage of the crowdfunding campaign). Saturday night will bring a triple feature of Dan O’Bannon’s Return of the Living Dead (1985), Lamberto Bava’s Demons (1985) and the famously (up-until-now) unfinished Grizzly II: Revenge!

Tickets are available for the events here: Knoxville Horror Fest 2020

KNOXVILLE, TENNESSEE — The Knoxville Horror Film Fest will present its twelfth annual weekend of cinematic scares Friday, October 23 through Sunday, October 25, with programming split between Maryville, Tennessee’s Parkway Drive-In , the nearby The Bird & The Book, and the festival’s home base at Central Cinema in Knoxville.

After years hosting key screenings at a local multiplex, KHFF’s move to the Parkway is both a COVID-era safety precaution and the fulfillment of a long-term goal, reflected in a dream lineup of drive-in chillers: Friday night features Sam Raimi’s EVIL DEAD 2 (1987) and J.P. Simon’s PIECES (1982), while Saturday offers a 35th anniversary double feature of Dan O’Bannon’s RETURN OF THE LIVING DEAD (1985) and Lamberto Bava’s DEMONS (1985).

Friday night’s triple feature presentation will be rounded out by the Southeastern US Premiere of THE STYLIST , the debut feature from KHFF alum and collaborator Jill Gevargizian, who will be in attendance for the weekend. Heavy on both psychology and gore, The Stylist follows a disturbed hairdresser (Najarra Townsend, reprising her role from the award-winning 2016 short) as a gruesome secret life threatens her budding friendship with a client played by After Midnight’s Brea Grant. Director in attendance.

Saturday night’s closing film, meanwhile, straddles the line between premiere and throwback: abandoned in 1983 and long available only as a VHS workprint, the newly restored and completed GRIZZLY II: REVENGE tracks the carnage at an outdoor rock show as a mama bear takes revenge for her slaughtered cubs. A nominal sequel to William Girdler’s popular 1976 B-movie Grizzly (screened at last year’s KHFF “Girdlerthon”), the film stars Raiders of the Lost Ark’s John Rhys-Davies and One Flew Over The Cuckoo’s Nest ’s Louise Fletcher and features pre-fame turns from Charlie Sheen, Laura Dern and George Clooney.

In addition to Friday and Saturday’s drive-in programming, full passholders will have exclusive access to hours of touring & local short films as well as a live kickoff episode from local podcast Nerdy Laser . These events will be hosted at The Bird & The Book (a pub & eatery attached to Maryville’s Southland Books and video store The Dungeon) and at Central Cinema , a single-screen moviehouse just north of downtown Knoxville. (To limit venue capacity and keep things safe, the bulk of this programming will screen twice over the course of the weekend; guests will also be required to wear masks during indoor events, and should expect further safety measures as appropriate.)

A limited number of Weekend Passes ($60) remain at Film Freeway and KnoxHorrorFest.com , along with a handful of deluxe “R.I.P.” Passes ($90) including a KHFF 2020 shirt, priority admission to Central Cinema events and more. Standalone two-night drive-in passes ($40) will be available Friday, September 17, with single-night advance tickets to follow.

Founded in 2009, the Knoxville Horror Film Fest has grown from a single short film program into a multi-venue weekend event celebrating the best in horror cinema. It is the longest-running film festival in Knoxville, and recognized as one of the southeast’s premier genre movie destinations. In 2018 the KHFF team opened Central Cinema to local acclaim; the theater is currently closed in response to the pandemic but hopes to reopen soon. 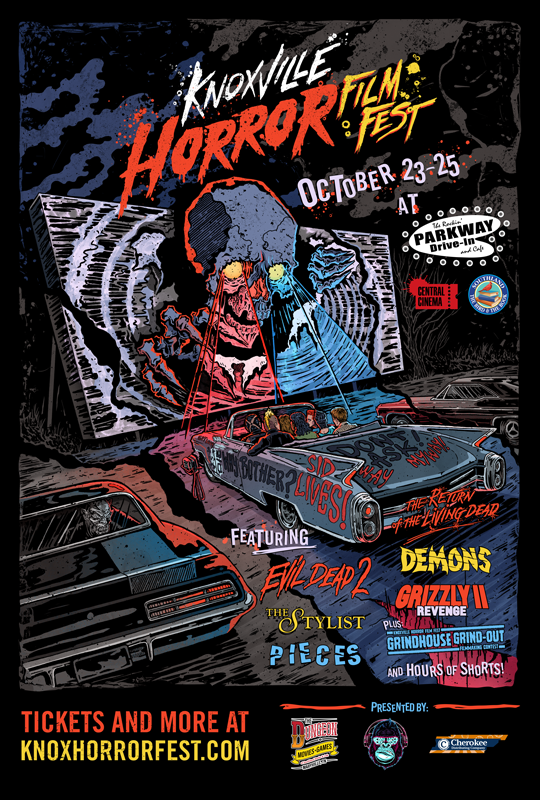