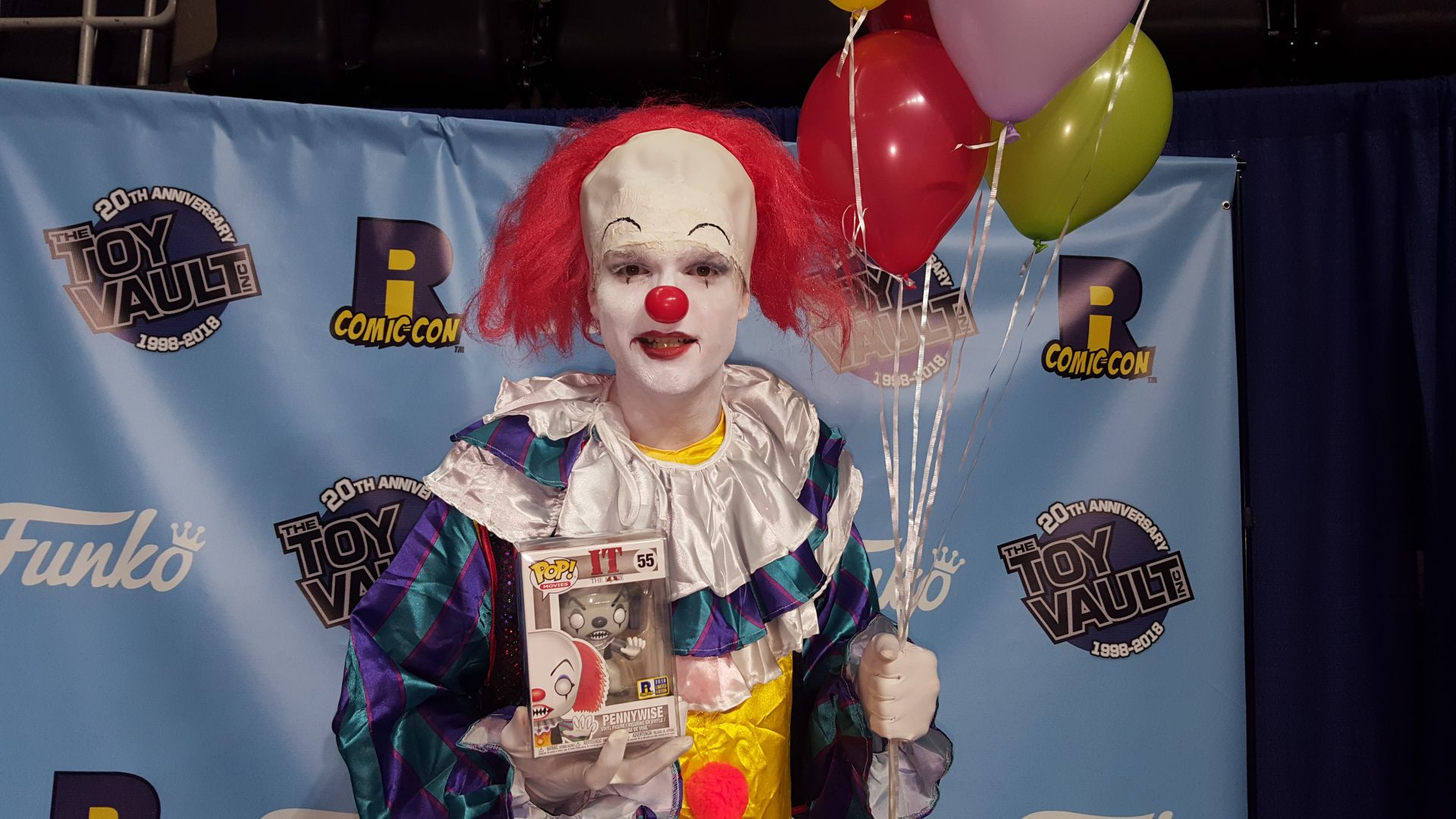 The Toy Vault was a big hit at this past weekend’s Rhode Island Comic Con, where they debuted their first convention exclusive Funko Pop figure. Since their first announcement of their black and white variant based on Tim Curry’s Pennywise from the original It TV movie, fans have been clamoring to get their hands on this elusive figure. Stationed just a short walk away from where Curry met with fans all weekend, The Toy Vault’s sales queue featured the kinds of line-forming stanchions normally reserved for headlining celebrities. Fans waited patiently in line to get their hands on their very own black and white Pennywise all weekend, and they had the opportunity to celebrate their new score with a personal photo op featuring a real-life Pennywise look-alike- complete with colorful balloons and a trademark red nose and hair! The Toy Vault CEO Chris Chilton spoke with Horror News Network at Rhode Island Comic Con about the thought process behind this exciting new Pop figure, The Toy Vault’s charity auction of one of the initial prototypes, and all things Funko Pop! 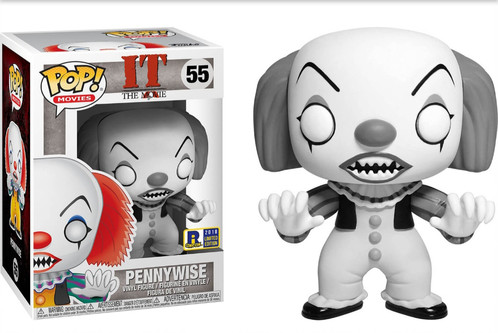 Horror News Network: How did it come to be that you would be producing an exclusive Funko Pop figure for Rhode Island Comic Con? How did you decide on a black and white Pennywise variant?

Chris Chilton: We partnered together with Rhode Island Comic Con about eight months ago. This is our first exclusive, and Rhode Island Comic Con is one of the biggest conventions around, so Funko wanted to work with us on something special. It was truly a “perfect storm” of the three of us working together to put together something special. We knew that Tim Curry was going to be a guest at the show, so Pennywise was the right character for this year’s convention. Funko offers a variety of different variant options, but we knew we didn’t want something generic like blood on his hands. We felt that black and white was the way to go because Pennywise actually appears in the movie in black and white.

Horror News Network: When you began working on this project, did you have an idea how popular this Pop figure would end up being?

Chris Chilton: Our Funko rep warned us that it would be big. They monitor social media closely, and they knew that fans are interested in the character and the franchise. Sure enough, when the figure was first announced on the official Funko blog, fans were excited about our choice of color scheme: “that’s from the movie!” Funko wanted to make sure that as many fans as possible would have a chance to own the figure, so we agreed to limit sales to one per customer.

Horror News Network: You raised over $300 for the New England Humane Society by auctioning off a prototype black and white Pennywise figure on eBay. Can you tell us a little bit about how that came to be? Are there any differences between the prototype and the production Pop figures?

Chris Chilton: Before they began production, Funko received six prototype figures for approval. They sent one to us, and it looks the same as the production figures, except the production figures have an embossed code on the bottom of the box which specifies the country code of the manufacturer. We thought about keeping the figure for our office, but we decided to offer it up for charity instead. Our owner, Dan (Mayer), is a big dog lover, and the New England Humane Society of Northern Rhode Island does a great job of taking care of stray dogs in the area. We were happy we could help them out.

Horror News Network: Why do you think Funko Pop figures are so popular with fans of pop culture?

Chris Chilton: They make something for everyone. Anime Pop figures are very popular in all of our stores. Pops from franchises like Dragon Ball Z fly off the shelves. Funko makes figures from properties you can’t get anything else for, and they become immediately popular with fans. Our Married with Children and I Love Lucy Pops sold out faster than our Star Wars and Avengers: Infinity War Pops! You can maybe find an I Love Lucy clock somewhere, but where else are you going to find I Love Lucy toys?

Horror News Network: I know it’s a collaborative process, but if you personally got to decide next year’s exclusive Rhode Island Comic Con Funko Pop figure, what would you choose?

Chris Chilton: I’m an 80’s kid, so I always prefer anything from that era. I’d like to see more Transformers Pops. They made three from the movies a while back, but that was it. I also like the music ones they have coming out, like the new Queen Pops. I’d love to see some Pink Floyd Pops, too!