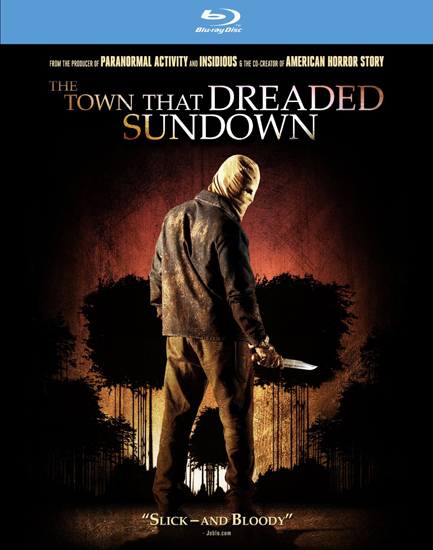 Synopsis: 65 years after a masked serial killer terrorized the small town of Texarkana, the so-called ‘moonlight murders’ begin again. Is it a copycat or something even more sinister? A lonely high school girl, with dark secrets of her own, may be the key to catching him.

Our Thoughts: ‘The Town That Dreaded Sundown’ (2014) is a continuation of the original film that was released in 1976. Taking place present day, it centers around the town that plays that 1976 film about the murders every Halloween.

The original was a very early slasher. This new film takes the murder, mystery and slashing of the original up on all levels and into the 21st century. Gone is the cheesy humor that, I feel, took some of the terror away from the ’76 film, while the gore, blood and scares are magnified to extreme levels in comparison.

The Phantom killer, or a copycat, is terrorizing Texarkana, in an effort to “make them remember”, as he puts it. The story is told in an extremely suspenseful manner, sucks you in from the very beginning, and keeps you on the edge of your seat trying to figure out who the killer is.

While I did like the first film, and it was good for it’s time, I feel this film is a better horror film and tells the story in a more effective and horrifying manner.  Addison Timlin is captivating as Phantom-attack survivor Jami Lerner. Denis O’Hare is at the top of his game as Charles Pierce Jr., the son of director of the original film. Co-stars Veronica Cartwright, Gary Cole, Joshua Leonard and Spencer Treat Clark also give excellent performances. Whether you have seen the original or not, ‘The Town That Dreaded Sundown’ more than stands on it’s own as a new addition to the slasher genre and fans won’t want to pass on this one!