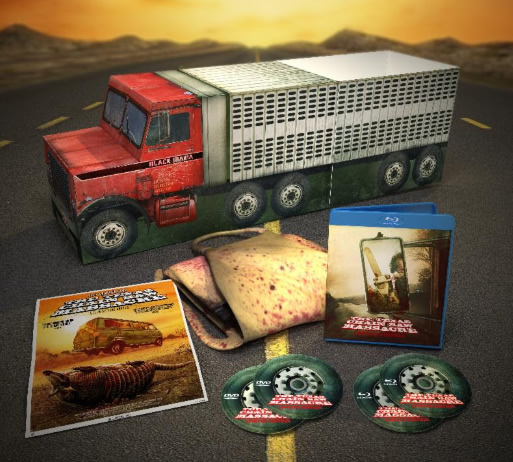 It’s been imitated and remade, but never equaled. Tobe Hooper’s THE TEXAS CHAIN SAW MASSACRE rose from a notorious 1974 sleeper sensation to rank as one of the greatest horror films ever made. Now, to mark the film’s 40th anniversary, Dark Sky Films is presenting the digitally re-mastered masterpiece on Blu-ray for the first time in a stunning Limited Deluxe “Black Maria” Collector’s Edition box set.

THE TEXAS CHAIN SAW MASSACRE appears in an all-new 4K digital transfer and with a newly created 7.1 surround sound mix supervised by director Hooper (Poltergeist). This release marks the only transfer of the film to go back to the original 16mm A/B rolls, the actual film that rolled through the cameras. The Limited Deluxe “Black Maria” Edition of THE TEXAS CHAIN SAW MASSACRE will be released at retail in October but will be available exclusively at www.gorgon-video.com for 30 days starting September 16, 2014. Fans of the film will recognize the unique packaging as a replica of the iconic ‘Black Maria’ cattle truck that comes to Sally Hardesty’s rescue when she’s being pursued by Leatherface, a fitting nod to the legions of TCSM enthusiasts who were instrumental in keeping the film at the forefront of the genre throughout for the past 40 years and a true collectible display piece.’

This four-disc DVD/Blu-ray combo pack will include a wealth of extras, including:

THE TEXAS CHAIN SAW MASSACRE received a mixed critical reception upon its initial release – the Los Angeles Times called it “despicable” – but horror fans immediately recognized it has a breakthrough in unbearable suspense. The story, written by director Tobe Hooper and Kim Henkel, is dreadfully simple: Five young people on a weekend getaway in remote Texas countryside fall prey to a chain saw-wielding butcher (dubbed Leatherface because of his mask made of human skin) and his demented cannibalistic family. Thanks to startling scenes such as a woman being impaled on a meat hook, horror cinema would never be the same. Violent, confrontational and shockingly realistic, the film terrified audiences and was the most buzzed-about release of its time (a buzz fueled by the marketing campaign that claimed it was based on a true story).

Thrust upon an America disillusioned by the Vietnam War and Watergate, the 1974 shocker faced a storm of controversy, censorship and outcry. But this masterpiece of horror has stood the test of time to become a landmark motion picture and cultural milestone, having opened the (sliding steel) door to the entire slasher genre of the 1980s and beyond.

In addition to the Limited Deluxe “Black Maria” Edition of THE TEXAS CHAIN SAW MASSACRE , the film will also be released as a standard DVD, Blu-ray and DVD/Blu-ray Combo on September 16 at retail outlets nationwide.