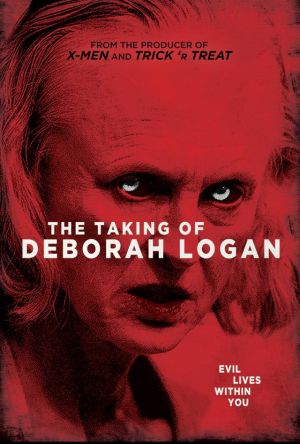 The Taking of Deborah Logan Review

“Yeah, but I hate the found footage genre.”

How many times have you heard that said by some self-righteous, holier-than-thou, ‘too cool for you’ horror movie purist asshole? Well, I’ll let you in on a little secret…I am that asshole. I’ve hated found footage from day one. I vividly remember calling in sick to work to get tickets for some friends and I for the opening night of The Blair Witch Project. Well, without getting into a dissertation of that particular film, let’s just say that that’s where my hatred began. Oh, don’t get me wrong, there have been exceptions; I enjoyed some of the REC series as well as a few of the Paranormal Activity‘s and 2008’s Home Movie but beyond that, I’ve always said that this genre has more than overstayed it’s welcome.

Usher in The Taking of Deborah Logan. One night this week while flipping through Netflix to catch up on some of the flicks I’ve missed out on recently, I stumbled upon this title. I read the blurb and figured it was just another “whatever” in a sea of “whatever” found footage films and was about to keep cruising until something caught my eye; Netflix users had given this film 4.5 out of 5 stars. I’ll admit, that almost wasn’t enough to reel me in…my thumb hovered dangerously over the “next” button on my remote until I finally gave in and decided to give it a whirl.

At the start, we’re shown a small film crew setting up at a nice country house and it’s explained that they are there to document the experience of Deborah Logan (masterfully played by Jill Larson) and to chronicle her slip into Alzheimer’s Disease as a part of one of the crews college thesis. Deborah is being taken care of by her middle-aged daughter Sarah (Anne Ramsey). Sarah has agreed to let the crew do this as a means to help pay for her mother’s mounting medical expenses. The part of the film dealing with Alzheimer’s by itself is quite powerful as the writer and director (Adam Robitel and Gavin Heffernan) really capture the sheer hopelessness of the disease and the profound effect that it can have on the patient’s loved ones.

But…you’re not here for that, are you? You’re here for the scares and trust me, you will not be disapointed. As I’m sure you can imagine, the film crew slowly begins to get more than they bargained for as they continue to film Deborah. Her behavior becomes increasingly violent and we begin to wonder if more is happening here than the disease itself. Her doctors can’t seem to quell her erratic behavior and they feel that her Alzheimer’s is progressing faster than normal…but we know that’s not the case. Slowly we see that Deborah is being possessed and everything begins to spiral downward rather quickly.

I’ll not spoil the movie for you by going on any further about the plot but what I will say is that every time I thought that the film was going to resort to the silly jump-scares and shaky camera tricks of most films of the genre, it did not. Every time I thought that I had the movie figured out and that I knew the ending, I was wrong…and that ending, my friends, is truly something to be seen.

Adam and Gavin have put together a highly intelligent and incredibly scary story here that really captures the essence of what this genre should be. With the duo’s story-telling and the remarkable performance of Jill Larson in the title role, The Taking of Deborah Logan has done what I thought was impossible; it’s made me love a found footage film. Here we are at the end of 2014 and I can without question say that The Taking of Deborah Logan is on my short list of the best horror films of 2014 and is cemented at the very top of my even shorter list of the best found footage films I’ve seen to date. Bravo.