To the delight of his legions of fans, McFarlane and Image Comics will reveal a brand-new extension of the famed Spawn franchise June 30. The new spinoffs, as reported by comicbook.com, will include three new titles that will be preceded by a special one-shot, 52-page issue–Spawn’s Universe No. 1 (check out the J. Scott Campbell cover elsewhere on this page).

Spawn’s Universe No. 1, written by McFarlane, will boast four stories–featuring Spawn, She-Spawn, Medieval Spawn and Gunslinger Spawn–illustrated by Jim Cheung, Marcio Takara, Stephen Segovia and Brett Booth. Each of these chapters, as explained, will focus on a different Spawn character and will introduce new villains. This double-sized issue carries a suggested retail price of $5.99.

McFarlane said this project has been decades in the making. “I’ve waited almost 30 years to be able to get to this moment,” he said. The writer/artist added he hopes Spawn’s Universe No. 1 grows into “a fully formed world populated with hundreds of characters. The stage will be set with this book, and soon I’ll be launching into new monthly titles for the first time since 1992.”

McFarlane said he’s anxious to show comics fans “all the crazy ideas in my head, as well as opening the floodgate to many talented creators who have said they’d like to join me on this journey.”

Keep reading Horror News Network for all future updates on McFarlane’s “crazy ideas” for Spawn and his new universe. 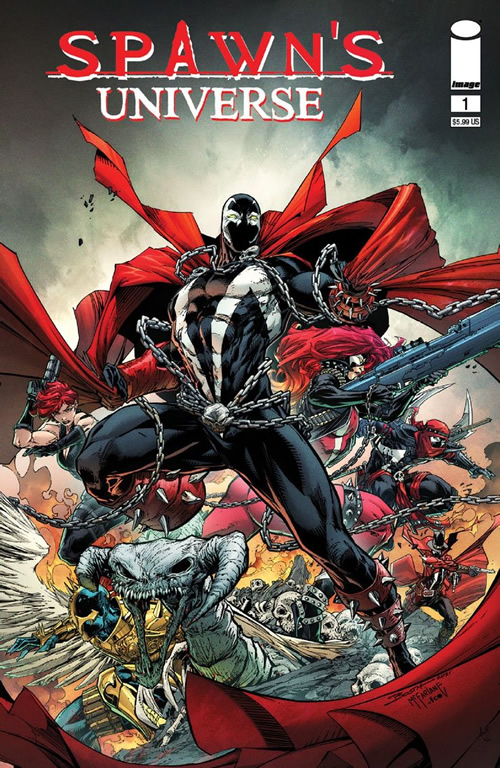