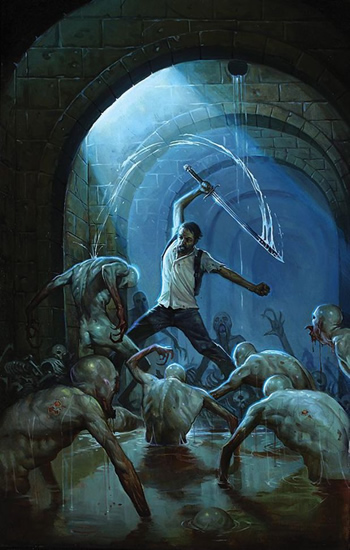 Synopsis: It’s been two years since the Master’s plan succeeded and a near apocalypse coated the world in darkness. Now able to roam freely, the Master’s legion of vampires rule the world,a horrifying police state where humans are harvested for blood. As humanity despairs, Dr. Ephraim Goodweather and an unlikely team of heroes continue their fight against extinction and hope to unlock the secret to the Master’s demise.

Our Thoughts:  The Strain:The Night Eternal is the beginning of the end. The final part of the trilogy starts off pretty grim. Lapham does this story justice with the way he lays out the bleak plot. Creepy reptilian, vampiric creatures now rule this world.  What does this third installment of the Strain hold for Dr. Ephraim? What mysterious plot is being hatched?   By the time the issue ends, it leaves more questions than answers. That is what drives comic fans to come back for more.

The artwork by Dan Jackson is a fantastic complement.  His interpretation of the demonic creatures and their heinous acts is gory and nightmarish.  That is the depiction fans have grown to appreciate and expect from The Strain comics in general.

Dark, gruesome, and filled with intrigue, the reader is left once again in anticipation for the next issue.   The Strain:The Night Eternal is out August 20th.