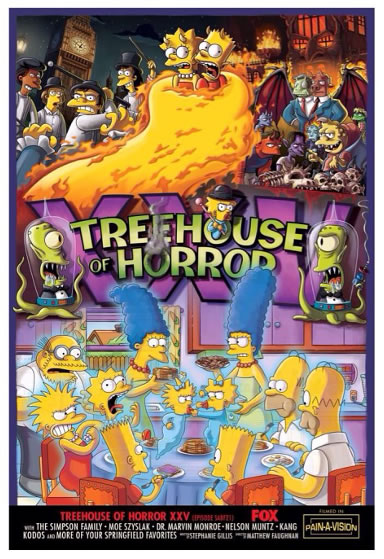 The Simpsons – Treehouse of Horror XXV
Review by Lynn Sorel

Synopsis: In a Halloween-theme episode Bart reads Aramaic symbols from the bottom of his desk and he and Lisa are transported to an alternate world filled with demons. Also, Moe organizes a “Clockwork Orange”-ish gang in which member Dum (Homer) falls for a young lady (Marge) who wants him quit. In a homage to “The Others,” the Simpsons reconnect with their earlier incarnations from the Tracey Ullman era.

Our Thoughts: This year’s Treehouse of Horror starts off with an introduction by Kang over clips of past years episodes. It seemed shorter than usually Halloween openings and not all that exciting, but it was cool to see the clips from past Halloweens.

The first story is called “School in Hell” and is very reminiscent of older Treehouse episodes. Bart inadvertently opens a portal to hell when reading some Aramaic symbols. It’s a classic Simpson’s hell and both Bart and Lisa take on demon forms, with hooves and all, upon arriving. While in hell, Lisa becomes popular and Bart amazingly excels in class. Lisa finds the portal back and transports them home. However, Bart wants to continue going to school there. It wraps up in classic funny fashion.

The second tale is called “A Clockwork Yellow” and is a parody of A Clockwork Orange. In yet another Stanley Kubrick homage, Moe, Homer, Lenny and Carl are the gang of guys from Clockwork, complete with British accents. When Homer meets Marge, the group splits up when he wants to end his life of crime. In the future, Moe is being tormented by the town bullies doing the same as he did as a younger man. This one finishes with a cool twist.

The third tale is called “The Others” and is a parody of the 2001 film of the same name. The Simpsons are being haunted and it turns out to be by their Tracey Ullman selves. Homer ends up flirting with ghost Marge, which makes living Marge jealous, so she kills herself to join him. All of the Simpsons end up dying and the end is quite entertaining.

Overall this was about the same as most Treehouse of Horror episodes in recent years. They can’t match the first season ones, but they are entertaining all the same. The first tale was definitely the strongest of the three, most reminiscent of early Halloween episodes. The second was a bit weaker with it being a parody of a non-horror film. The third was a bit better than the second, returning to horror again with a ghost story. I think the newer episodes, including this one, lack the edge the first ones had. Though they are still horror tales most of the time, they try to be more funny than scary and it makes for less entertaining stories. To be fair, this is their twenty-fifth Treehouse episode and they have already covered nearly everything. Despite that, the Treehouse of Horrors are still worth watching after all these years. Die-hard Simpsons fans will still be entertained.