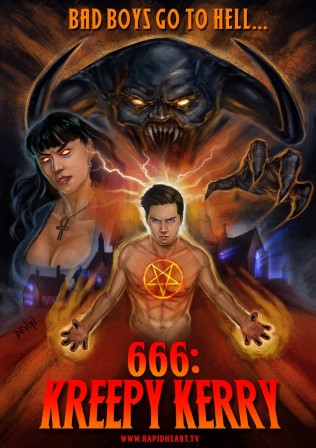 Sorry folks.  I hope you enjoyed my little April Fool’s Day ruse but we seriously only have 6 movies to tell you about this week. Not that lack of quantity has anything to do with the quality of these movies.  Each of these looks interesting in some way or another: evil telekinetic revenge; zombies; evil mole people; a crazy photographer; LARPing; hell, even a fifty year old (or quinquagenarian) French/Turkish flick.  Pleasant viewing, fellow fiends.

A recent transplant to Bradbury Academy, Kerry Carpenter is finding it difficult to contain his deadly empathic powers, soon resorting to using his gift in order to exact revenge when the other guys gang up on him.

A working class Irish family is caught up in a zombie invasion of Dublin, Ireland. When their son, Billy, becomes a zombie the family chooses to take care of him in the home much to the chagrin of the neighbors and the local crime boss. Meanwhile, they’ve invited an American documentarian to film their situation and the film crew is caught up in the mayhem. Will the family prove that blood is thicker than water or will their love lead to their eventual doom? One thing is clear, for the zombies in Ireland, the famine is definitely over.

Looking for a unique adventure while visiting Berlin, Denis and Lucia join a small group led by a local guide through the labyrinth of mysterious tunnels beneath the city. However, when an accident occurs and Denis and Lucia are left alone, the twisted residents that lurk in the underground transform their fun urban exploration into a nightmarish fight for survival as the couple try to claw their way back to the surface.

Kevin, a charming photographer, meets a multitude of beautiful women through his studio, but can’t seem to find one that will help him forget his traumatic past. Failure after failure, his quest soon spirals into madness.

A group of costumed “Live Action Role Players,” dressed as knights, elves and other medieval characters, take to the woods for “The Battle of Evermore.” But when a make-believe wizard casts a spell from an ancient book, purchased on eBay, fantasy becomes reality as a powerful demon manifests itself. Can these pretend warriors muster the courage to save themselves and the rest of humanity?

In the wake of the success (and massive controversy) surrounding Ken Russell’s The Devils, numerous filmmakers rushed to create their own Inquisition horror films, most of them inspired by the true story
of satanic possession and torture at the convent of Loudun. The Demons (Les Démons) is Jess Franco’s stellar entry in the nunsploitation canon, with a degree of sadism and sexual explicitness that overshadows its competitors.
The film begins with the torture and burning of an accused witch who, before the flames consume her, manages to curse the principal witchfinder and his minions. As a result, members of royalty and the
religious establishment are caused to suffer (or, some might say, enjoy) a series of human depravities. Franco’s camera lingers over these episodes of torture, sex, and demon possession, and captures them with a sense of tenderness that is both aesthetically pleasing and deeply unsettling.
Previously unreleased on video in the U.S., this Redemption edition has been mastered in HD from the original 35mm negative, and represents the complete, uncensored version of the film.