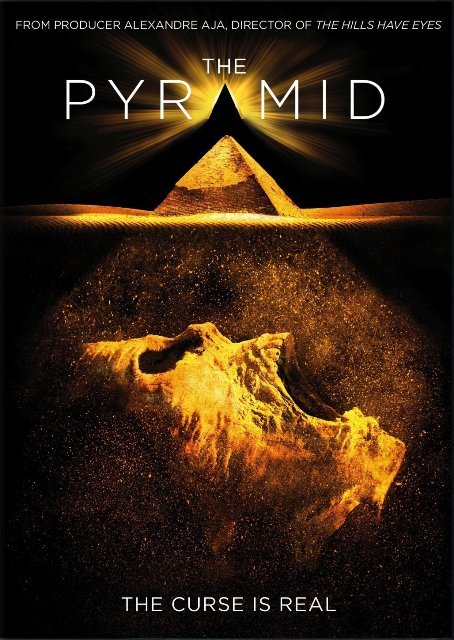 Synopsis: An archaeological team attempts to unlock the secrets of a lost pyramid only to find themselves hunted by an insidious creature.

Our Thoughts: ‘The Pyramid’ is a mix of creature feature, found footage and Egyptian Mythology brought to life.

The set up of the story and first half of the film are pretty predictable. You have a team of researchers uncovering something amazing, a lost pyramid, although dangerous, and end up having to go inside it despite knowing that danger, and then becoming trapped inside. However, the latter half of the film I found to be increasingly fascinating.

The main mystery of the pyramid is the creature of unknown origin living inside it. It destroys the NASA rover they send inside the pyramid, and then begins hunting them. This may sound like your average SyFy film, but I assure you, it is not. The story becomes more mythological in nature than I expected. Maybe it’s because I’ve always been interested in Egyptian Mythology, but I found the big reveal to be disturbingly amazing. The downside of that is some of the information presented isn’t entirely accurate. However it is still entertaining to watch and keeps you on the edge of your seat. As for the ending, they could have wrapped it up a few scenes sooner, but I still enjoyed it.

The film has a few things going for it that others of similar nature do not. Unlike most found footage films, this one isn’t entirely from the documentary film crew’s camera view. We get an outside view and even a satellite view at one point in the story. There is also actor Denis O’Hare, who brings his excellent talent to the character of Holden, the no-nonsense, protective father of Nora. This film is also fairly gory and gets the R-rating, when a lot of similar films play it safe and go for the PG-13 that I find just annoying.

Ashley Hinshaw is also very good as impetuous, young archaeologist Nora. The special effects are decent and believable for the most part, although obviously CGI. ‘The Pyramid’ is a very good B-movie with a great story. Denis O’Hare fans won’t want to miss it. Neither will Egyptian mythology fans, if they can get past the handful of inaccuracies.