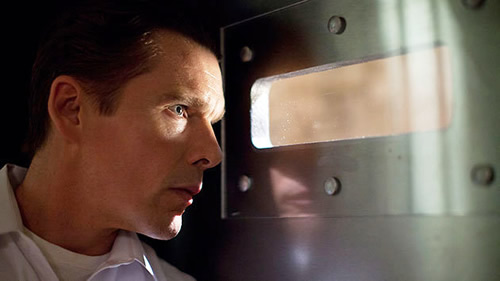 Synopsis: If on one night every year, you could commit any crime without facing consequences, what would you do? In The Purge, a speculative thriller that follows one family over the course of a single night, four people will be tested to see how far they will go to protect themselves when the vicious outside world breaks into their home. In an America wracked by crime and overcrowded prisons, the government has sanctioned an annual 12-hour period in which any and all criminal activity-including murder-becomes legal. The police can’t be called. Hospitals suspend help. It’s one night when the citizenry regulates itself without thought of punishment. On this night plagued by violence and an epidemic of crime, one family wrestles with the decision of who they will become when a stranger comes knocking.

That, in a nutshell, is what ÃƒÂ¢Ã¢â€šÂ¬Ã…â€œThe PurgeÃƒÂ¢Ã¢â€šÂ¬Ã‚Â is about. The movie is set in a future America, where crime is almost extinct thanks to this system, which allows everyone to go bat-shit crazy one night a year.

We are introduced to the Sandin family. They exemplify the ÃƒÂ¢Ã¢â€šÂ¬Ã…â€œAmerican DreamÃƒÂ¢Ã¢â€šÂ¬Ã‚Â family, who live in a big mansion with a state-of-the-art security system designed to keep anyone out. James Sandin (played by Ethan Hawke) sells these security systems. Everyone on there well-to-do block has them as well, sold to them by Mr. Sandin, who has made quite the living off of this.

This, as well as the nightly news stories and debates the audience hears in the background, set the underlying social commentary to the film. The wealthy are usually well protected in their secure homes, while the lower middle class and poor are not. Those are the social groups who usually are the ones who do not make it through ÃƒÂ¢Ã¢â€šÂ¬Ã…â€œthe Purge.ÃƒÂ¢Ã¢â€šÂ¬Ã‚Â For me, this was a great element to add to the film. It helped develop a true story to the movie, not just a bloody thriller.

As the actual purge begins, we hear gunfire and are shown more clips of chaos caught on the family’s security camera. Before long, we see a homeless man running for his life down the block. The youngest, Charlie Sandin, opens the security system and lets him into their house. From this point on, it really hits the fan for the Sandin family. As horror fans have most likely seen from the trailer, some unwanted visitors come to the door and demand the man come so they can kill him.

I have to give the film credit as they delivered the goods rather quickly. We werenÃƒÂ¢Ã¢â€šÂ¬Ã¢â€žÂ¢t forced to sit around and wait too long for the tension and action to heat up. Once it starts, it doesnÃƒÂ¢Ã¢â€šÂ¬Ã¢â€žÂ¢t stop until the very end of the movie. There are many twists and turns throughout. We see the characters battle each other, and at times their own conscience.

While not everyone can love every movie in the theater, the aspect that I really liked about this movie is the original and creative concept. Ethan Hawke is fantastic as the man trying to get his family through the night alive. Max Burkholder also gives a really impressive performance as young Charlie Sandin, a young boy processing the concept of this terrifying night. The idea of America reborn and thriving thanks to its new ÃƒÂ¢Ã¢â€šÂ¬Ã…â€œFounding FathersÃƒÂ¢Ã¢â€šÂ¬Ã‚Â and the day called ÃƒÂ¢Ã¢â€šÂ¬Ã…â€œThe Purge,ÃƒÂ¢Ã¢â€šÂ¬Ã‚Â is one that is intriguing and does not disappoint. Try to imagine a policy like this being implemented. Now ask yourself ÃƒÂ¢Ã¢â€šÂ¬Ã…â€œWhat would I do in this situation?ÃƒÂ¢Ã¢â€šÂ¬Ã‚Â
Ãƒâ€šÃ‚Â