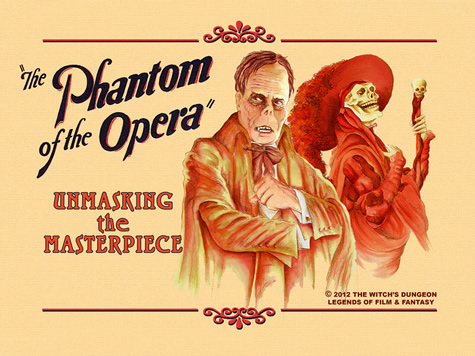 The Phantom of the Opera: Unmasking the Masterpiece-Review

The Phantom of the Opera: Unmasking the Masterpiece (2013)

Synopsis:
A revealing retrospective of the timeless horror classic, from the silent screen to the Broadway stage.

To be honest, The Phantom of the Opera was never one of my favorite classic monsters, but after viewing Cortlandt Hull’s fascinating documentary I feel a personal revaluation of this seminal character is in order. Hull has impeccable credentials for tackling this subject matter; since 1966 he has operated the impressive Witch’s Dungeon wax museum in Bristol, CT and has been a tireless advocate for golden age horror and science fiction. His acquaintances include Don Post, Dick Smith, Forrest J. Ackerman, Sara Karloff, Bela G. Lugosi, and Victoria Price. His passion for the genre is on full display in Unmasking the Legend. The documentary, narrated beautifully by Florence Casey, traces the history, cultural impact, and diverse interpretations of the Phantom of the Opera, from Gaston Leroux’s 1909 novel to the wildly successful Broadway adaptation. The documentary is filled with film clips, stills, posters, and interviews with critics, fans, and participants such as Carla Laemmle (niece of the founder of Universal Studios), James Bama (the remarkable unsung artist for the Aurora Model Kit line), Ron Chaney (great grandson of Lon Chaney), Michael Blake (Lon Chaney expert), and Tom Savini. The conversations run the gamut from make-up techniques, set design, filming, advertising, acting interpretations, and merchandising. Some interesting facts:

• Lon Chaney spearheaded the cinematic adaptations of both The Hunchback of Notre Dame (1923) and The Phantom of the Opera (1925)
• Gaston Leroux was consulted for the 1925 version
• Lon Chaney and Phantom director Rubert Julian relationship deteriorated during filming and they refused to speak to each other
• Boris Karloff was going to play the Phantom in the 1943 remake but, because of a contract dispute, Claude Rains got the role
The most impressive interview is with actor Daniel Roebuck (the emotionless teenage murderer in River’s Edge), who speaks eloquently and ardently about James Cagney’s performance as Lon Chaney (and by proxy the Phantom) in the classic bio-pic Man of a Thousand Faces. The critical evaluations of the different cinematic adaptations are extremely insightful, particularly the discussion of what is wrong with Hammer Film’s version of the Phantom (it should have starred Christopher Lee).

The documentary is also a testament to the phenomenon that was Lon Chaney. His ability to find the humanity in even the most grotesque characters is rightly celebrated by all the interviewees. In addition to Chaney’s amazing transformation, the film highlights many of the other actors that have been the Phantom: Claude Rains, Herbert Lom, Maximilian Schel, Robert Englund, Julian Sands, and Gerard Butler. Hull also looks at the cinematic influence the Phantom films have had on other horror movies such as Mystery of the Wax Museum, House of Wax, The Climax, The Abominable Dr. Phibes, Phantom of the Paradise, and even a Mexican version with two Phantoms! The film ends with a thorough look at the massively popular but critically maligned Andrew Lloyd Webber’s Phantom. Broadway Phantom Hugh Panero gives an absorbing discussion of how complex and intricate the production is and the physical toll the role takes on his body (his larynx was out of whack from singing with his mask on)

Phantom of the Opera: Unmasking the Legend does what all great documentaries do: it entertains, it informs, it gets viewers to reconsider their relationships and attitudes towards its subject matter. Here’s hoping that Hull will give the same in-depth treatment to some of the other classic monsters.