‘The Munsters’ Reboot Coming To The Big Screen–Someday

The most famous residents of Mockingbird Lane have been slow to get their act together and take it on the road.

Rob Zombie–the celebrated and controversial horror-themed musician/filmmaker–last month confirmed he will helm a big-screen reboot of The Munsters, but a report on comicbook.com this week may have put a damper on hopes of seeing that Universal film anytime soon.

Sheri Moon Zombie–the entertainer’s wife–recently posted a photo on her Facebook page (seen below) showing her riding in the classic Munster Koach with a likeness of Eddie Munster propped up in the back.

Her message to fans of the ’60s TV series was short and sweet. “Folks are asking when a trailer is coming out,” she wrote. “The film is in pre-production, currently being location scouted, so nothing to show for a while yet.” 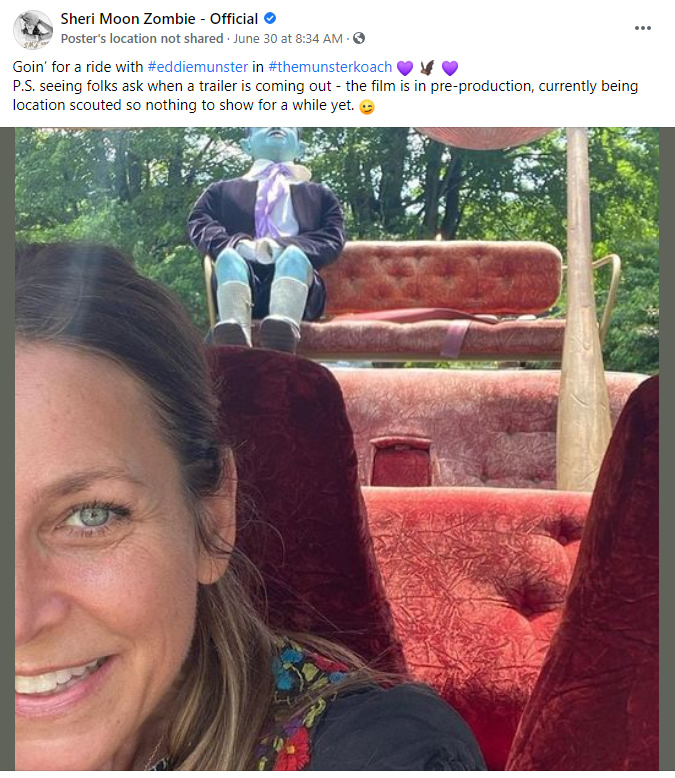 Zombie–who directed the 2007 remake of Halloween and 2009’s Halloween II–said The Munsters is a film project he has been “chasing for 20 years,” but he has confirmed little about the movie so far. Reports have the film heading directly to NBC Universal’s streamer Peacock, but Zombie has not commented on that as of this writing.

As far as casting goes, the only two roles that look locked in at this time are Sheri Moon as Lily and Jeff Daniel Phillips as Herman. Rumors have mentioned Richard Brake, Daniel Roebuck and Jorge Garcia in undisclosed main roles. It has also been speculated that Cassandra Peterson (Elvira herself) may appear in the film, but nothing has been set in stone.

The Munsters–which ran for 70 episodes on CBS from 1964-1966–was nominated for a Golden Globe for Best Television Series in 1965. The familiar cast included Fred Gwynne as Herman, Yvonne De Carlo as Lily, Al Lewis as Grandpa, Butch Patrick as Eddie and Beverley Owen (replaced early on by Pat Priest) as Marilyn.

Keep reading Horror News Network for the next update on The Munsters.

‘The Munsters’ Star Sheds Some Light On Upcoming Reboot

Super 7 Rolls Out Trio Of Figures From ‘The Munsters’